Hell yeah, we somehow managed to drive from NYC to Baltimore in 5 hours while only spending about 1 hour in the state of NJ.......opting for a relatively beautiful drive through eastern PA instead. It worked like a charm!
We had some amazing food at Hill Country BBQ in the middle of Manhattan last night. http://www.hillcountryny.com/home.php It was Texas-style, which is not my favorite, but I still would give the (full) pork ribs a "8 out of 10." Only in Memphis have I had ribs that were TRULY better. They didn't have any beer on tap (????) but the PBR was cold, and only $2. They had one of my favorite down-home style features......live music (bar downstairs) piped through the PA through the rest of the restaurant. The DJ selections (Dylan, MJ Hurt, W Guthrie, BB King) were pedestrian for a roots music fan, but still pretty damn entertaining, considering it was NYC, and all NYC restaurants seem to either loop "Enya" or the Strokes. Both of which are vomitous.
In other news, Virginia Tech football pounded the University of Virginia - Charlottesville Campus on saturday. The UVA-C message board banter went from friday's "We are going to destroy Va Tech" to sunday's "Football doesn't matter, clearly we are the superior university." 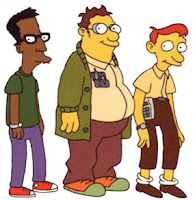 It was a great game to watch, despite the fact that I had to watch it in the room with my sleeping 89-year old grandmother, so I couldn't bounce around, jump, yell, or even cheer. Oh well. At least I got to watch it in HD!!!!!! Wooo hooo bitches! Chris Long (UVA) is a BEAST,

and as such, Va Tech double teamed him and ran to the opposite side of the field...........which STILL netted Long something like 3 sacks, 10 tackles, and 1 forced fumble. BEAST!

Otherwise it was a fun game to watch - damn close until the 4th quarter. My Hokies will have another shot at Boston College next week for the ACC championship. I have a feeling BC is not nearly as excited about it..for a variety of reasons.

Good time to be a Va Tech fan. When I was a freshman, VT went 2-8-1.
Anyway, back to the grind tomorrow. Staking out one more wetland construction site for 2007 on the DE/MD border, and working on the budget and other random painful tasks. Hope everybody had a great weekend.

When perennial loser Temple (my alma mater) beat Va Tech in 1998 (Vick's freshaman year...yeah, that Vick) it was the biggest party in Temple history I heard.

That has become a Va Tech mantra, "don't get Templed."