2 lessons learned this week from an awful day afield:

1) Never assume that the marine forecast is correct;

2) Never get so absorbed by one portion of the forecast, that you overlook other key details.

So......the story. Left home on time, excited for a promising morning of duck hunting (air 31 degrees, heavy clouds, light onshore wind, birds in the area), and hit one stumbling block after another. Decided to access the duck blind through a local park (which is legal). Unfortunately Ranger Rick (or whoever) was 25 minutes late for work and the (typically unlocked) park gate was locked...resulting in about a 30 - 40 minute delay in my tight schedule to get out on the water. And of course, still had to pay $3 to access the park. Hooray!

I had checked the marine forecast obsessively for the last few days just to confirm some light winds that would be blowing right in my face - not the best thing, but manageable. I neglected to check THE TIDE! and once the boat was out, pretty much saw a very dark version of this: 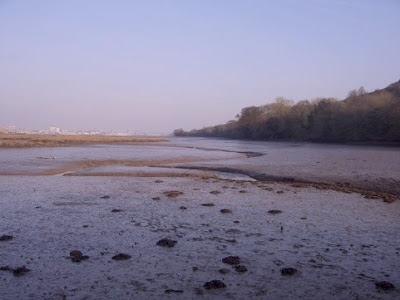 So I had the divine experience of dragging the boat through the mud and about 3" of water for about a half-mile before I reached the duck blind. About the time I arrived, legal shooting time had passed, and folks started harvesting birds - I had no decoys in the water yet! But at least the winds were light.

About 45 minutes passed and the wind picked up substantially (forecast 3 to 8 mph). I saw whitecaps in the middle of the Bay, which usually means that winds have exceeded 15mph. A few minutes later, 1 to 2 foot waves started crashing against the duck blind. This wave action not only caused me some serious stress, but caused all 3,000 to 4,000 ducks in the area to move out into open water, about 2 miles out in the Bay. Not helpful. Had a lone shot at a lone bufflehead - and missed! Even less helpful!

Contrary to the marine forecast (winds to max out around 9am at 8mph), the winds continued to build, causing me to be a little concerned for my safety, and my ability to get the boat back on solid ground (and not sunk in the mud). I started packing the boat with the approximately 3 dozen decoys I had set out, and was promptly set upon by at least 3 large flocks of ducks, which I could do nothing about since my hands were full of decoy line and decoys. Took a few deep breaths and pushed the boat out into thigh-deep water, past the waves, and dragged it behind me the entire way back to the boat landing.

This story would not be complete without describing the "warning ticket" that Ranger Rick put on my windshield, which said, "WARNING! Our unofficial policy is that hunters can no longer park their vehicles at the park, while hunting at the park." Which, obviously, makes no sense. But I am a guy that understands "cutting my losses" so instead of trying to hunt down Ranger Rick and demand an explanation for his absurd diktat (which was my first instinct), I figured, "let's leave it alone." Enough damage had been done. Better luck next time.