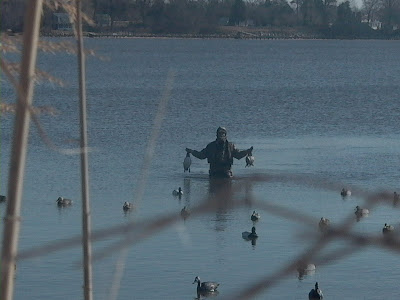 Two canvasback drakes
I was on the road in northeastern Maryland for work and got an invite to hunt a nice blind, on a nice creek, with some great guys. Ambiguous enough? It's the last week of the season, and all the freshwater areas like ponds and small wetlands are under ice - the ducks are not using them at all. At the same time, the weather is not quite bitter enough to push ducks into the corn fields. So that leaves tidal rivers and creeks. We utilized an interesting decoy setup on this one - about 2 dozen mallards and 6 dozen mixed scaup and redhead decoys, with about a dozen floating goose decoys off to the side. After about 6 hours, 4 of us managed to harvest 7 canvasbacks (limit: 8 canvasbacks out of a possible total of 24 ducks), and 5 geese (limit: 8). I shot really poorly, which did not help matters. I had to suck it up and leave around noon........back to work! 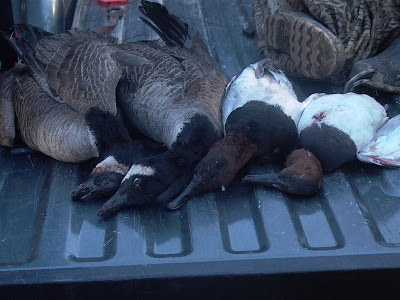 Kent County Combo - 2 cans, 2 geese
It has been a challenging, but not bad, season. The drought lasted into November, so the early-arriving ducks did not really see what habitat was around the farms and refuges. Hunting in late November to mid-December was very productive, as weather events were coming from the north and pushing ducks and geese from Canada into the Mid-Atlantic states, and also filling up wetlands and ponds. However, by Christmas, many of those ducks had flown south, and new weather events since then have been primarily noreasters - blowing up from the Mississippi & Gulf of Mexico. That keeps birds to the north of us (NY, PA, Canada) also. We never did get a flush of late ducks.

At any rate, it was a fun & challenging season that didn't require the purchase of a lot of new gear. And there is one hunt left.....the last day of the season!
at January 27, 2008

Welcome to the Maryland Blogger Alliance! It's great to have member who focuses on nature adventures around the Bay.

Thanks, I've been enjoying your blog recently also!

Nice! If you haven't already seen it check out my friends and I hunting Eiders last season.

Let the count down begin!