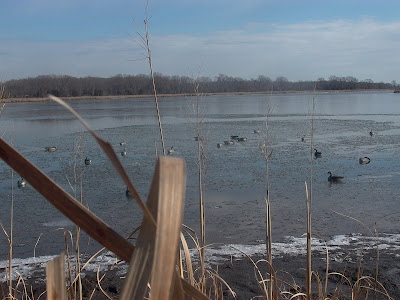 Decoys floating around in the bowl of ice cubes 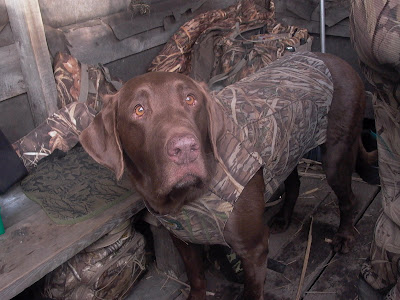 Hoss hears the geese too!
Took a chance on the last day of duck season and hunted a private/public tidal marsh on the lower Potomac. I was the guest of 3 locals, who have all lived within 10 miles of the spot their whole lives. Hoss, their loyal 7 year old retriever, joined us. We set out from the boat ramp at about 6am and it was frigid : 17 degrees. The boat was sailing through a solid sheet of ice - about 1/4" thick. Any ducks in the area had obviously flown out when the marsh froze overnight. When we arrived at the duck blind, I was equally skeptical of the decoy spread, which consisted of 3 dozen Herters goose floaters from about 1975 (no fresh paint), 6 hand painted cork or foam mallards, and a robo-duck spinning decoy. Since we had to run the boat through the ice about 30 times to open up a patch of open water, I was sure that this would be a long, sleepy morning. However, I was wrong.

The shooting started early and never became heavy, but was consistent enough to make it a fun day. Due to the full moon, the tide in the marsh was not behaving normally and at about noon, we realized that we would be stranded for another several hours in the mud. I shot much better, and ultimately claimed 2 geese (really 1.5), 3 mallards (really 2.5), and a very dark ruddy duck that I mistakenly thought was a redhead when it flew into the decoys at about 40 mph. Hoss got work early and often, making several difficult retrieves through ice, mud, and flowing water. His reward - bacon, a scrapple sandwich, a hamburger, and anything else that the boys cooked up in the blind over the propane stove. He always got his share.

It was a great way to end the season - a cold hunt that was difficult but rewarding, with some of the finest company you could have in southern Maryland. 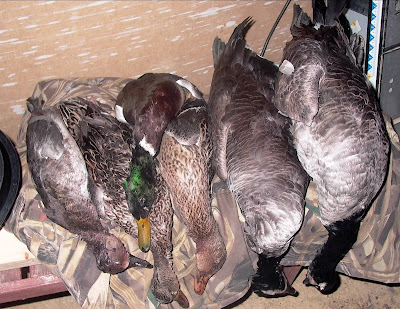 A taste of Southern Maryland!

It's cool to see your love of the ducks, goes through their life cycle.

Thanks (unless you're being sarcastic!). I have a lot of reverence for the wild animals I harvest. It requires us to think about the real value of the animals you eat...most people prefer not to think about it.

To that end, coming home empty-handed, cold, and wet gives us a little humility about our place on the earth. I went home fishless, birdless, and deer-less more often than not in 2007. Oh well!