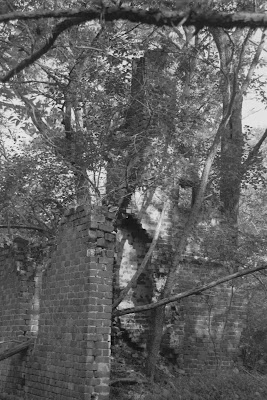 Next week should be a good one...it's officially late duck season, and we have a 3 day work trip planned for the eastern shore of VA - a fairly desolate, mosquito-ridden, two-county area that still holds a lot of history and a lot of secrets. Above - the remains of the first mansion house at the Mattasippi Plantation - the first agricultural settlement of the Johnson family in the New World. If you are an American Johnson, your ancestors likely either lived here or at least passed through here.
The eastern shore of Virginia is a challenging place to do swamp work because the soils are notoriously sandy. Sand makes it hard to control when and where the water goes, which, really, is what my job is all about understanding and controlling. But at least it's flat, which is helpful. One of the farms we're looking at (for wetland restoration) is one of the remaining parcels on the Mattasippi Plantation, which is now known by another name.

Fresh oysters are the call right now in the lower Chesapeake Bay, and when we finally get to put the waders on and hunt on friday, we are pretty sure ducks will be in the area. Expect good photos and hopefully some good stories :)
at January 12, 2008