A Great Weekend Out 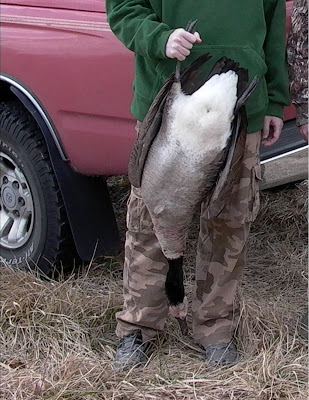 The brothers arrived late wednesday night. The temperature got to about 82 degrees, so hunting for thursday was definitely out. Instead of drinking and getting loud (our usual M.O.), everybody settled in, watched some bad late night TV, and eventually passed out.

Other than cooking breakfast for the whole crew, I worked thursday morning from home and let the brothers do their thing. Everybody was getting anxious so we went up to Loch Raven Trap & Skeet and shot a few rounds. Our shooting was mediocre but it was a really great time! It was the first time I had shot at their club, and I will definitely be going back. 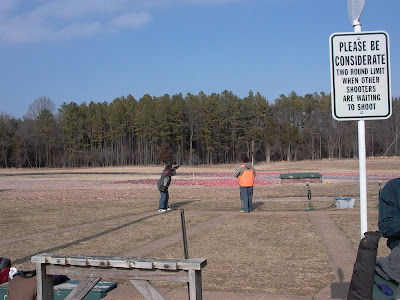 Thursday afternoon we got the call that some geese were getting nervous about the incoming weather, and were on the move near the Maryland / Pennsylvania border. Game on!

Friday morning brought a light snow, and what (at first) appeared to be perfect goose weather - below freezing, with moderate winds and no sun. However, we were foiled once again by our ongoing mild winter / drought, and by 10AM we had bright sun, 50 degree temperatures, and only two dead geese between the three of us. We were pretty disappointed at our botched effort, but we had stayed as flexible as we could, and when it came time to schedule the hunt (12 hours ahead of the actual hunt), we thought we were making the right call. Based on what we saw of area geese later that day, the light snow was our undoing. I believe that the snow scared the geese just enough so they got out of the area they were using (area of our hunt), to feed on better food (2,000 feet north of us). We relaxed for the rest of the day, and shot the .22 (targets) around the house, and the day was capped by an excellent made-from-scratch meal of Carolina BBQ, beans, and cornbread by Amy. Perfect.

The mild weather continued on saturday, so we were not motivated to chase down lazy geese. Instead, we went back over to Loch Raven Trap & Skeet and shot several more rounds, and enjoyed a few "hard to get" cigars from T-Dogg's recent trip to Centro America. Once again, the Nutty Professor out shot T-Dogg and I by 25% on every round, even though he was using my toughest gun (Rem 58 Sportsman, full choke). It was great to see him get excited about shooting, though!

We capped the weekend off with several movies, and the brothers got on their way back to VA on sunday morning.

Once again, the waterfowl harvest was not really productive, but the time spent together with my two brothers was priceless and hilarious. We talked a lot about our lives now, and about some of the great and not-great moments we've shared over the last 30 years together.

The late goose season continues for another week, but for me, waterfowl season is over now. The decoys and guns have all been laid out to clean. A lot of gear has already been hosed down and put away. My mind is already wandering toward gardening, turkey hunting, and the spring's frog and salamander hatch...
at February 10, 2008

Yes sir. The breast steaks were almost 2" thick. They became goose BBQ, and the rest of the bird became pot pie.