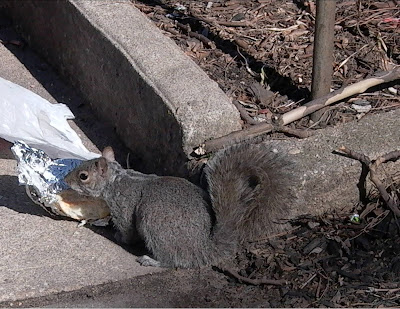 This Squirrel Says that Potato Knish is "Like, Woah."
Had an eventful trip to NYC last weekend. Was supposed to be relaxing, and was supposed to involve some "nature in the city" events and photos....but....none of that happened.

We left Maryland around 9pm, hoping for about a 12:30am arrival at my family's place in Queens, NY. At the Maryland - Delaware line, we sat in a pointless backup for over an hour. Reason for the delay? Only 2 toll booth stations open. On a holiday weekend. On I-95. By then I was pretty damn sleepy, but we pushed on into DE, and then southern NJ, and then Amy finally convinced me to pull over to sleep in Central New Jersey. It was already midnight. Ugh. Amy woke me up in a NJ Turnpike service plaza (apparently where I had pulled over) at about 1:30am. As you can see, this story isn't getting any better. We made it to the family place in NYC around 3:00am.


Saturday was actually fun - and anti-climactic. We slept until 10am, then ate lunch in the neighborhood, then took another nap from 1230 to 1pm, then took another nap from 3pm to 5pm. I have only spent about 3 nights in my own bed in the last 2 weeks - perhaps I was a little worn down? I was informed by my grandmother's nurse that the basement sink was backfilling - never a good sign - but I foolishly assumed some Drano would help and we went out for our Official Valentines Dinner tm . Of course we came back to the house and realized that the main sewer drain from the house to the street was clogged. AWESOME.


In short, we spent all day sunday dealing with the plumber, and my relatives, and that whole situation. Let me just say at this time, that Union labor is a great premise for progressive capitalism, however, when it's you who gets stuck with the $8,000 plumbers bill (they didn't even dig anything up or replace anything), then it's a little bit harder to say who the Suffering Worker is!


Anyway, back to real (and useful) posts tomorrow. As you can see, Ro did not appreciate the trip to NYC either. 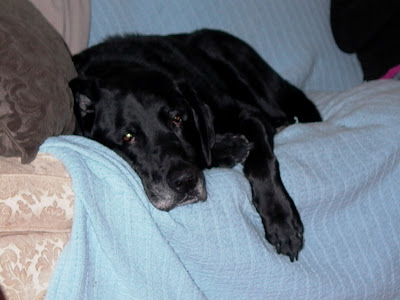