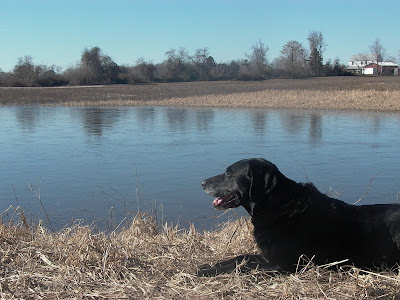 It has been a rough week, but I can't complain. Duck season is over, and the office work has to re-start in earnest. This week I have worked in the office on internal audits, grant applications, grant reports, letters to our wetland project funders....you name it. Ro and I got out yesterday to monitor some projects we built in 2007 in Maryland and Delaware - just to make sure they are actually working as habitat. Yesterday, there was ice on all of them, so no birds, but the habitat is there.

The above project is in the Delaware Bay drainage, and will be managed to provide bugs and mud for migrating shorebirds in April of every year. It gets flooded about 24" deep in the winter....coincidentally making it an outstanding duck hole. Which of course, is why the landowner ultimately agreed to let us flood up his cornfield. I know it looks like a lake, but trust me, it is all shallow.

OK - back to grown-up land: Lessons I have learned this week:

The last one has been a difficult one for me to learn, as I watch (like in any workplace) overachievers get minimal respect, while folks who do very little, continue to barely skate by, with very few consequences. I'm starting to see, after 10 years in this field, that it all evens out....given enough time. I'm starting to actually believe that. It has nothing to do with "fair" and a lot to do with "hard work" and "patience."

Y'all have a great weekend. The honey-do list piled up during late duck season, so I will be spending the next few days hanging trim, installing TV's, and similar fun stuff.

Labels: work, working for the man