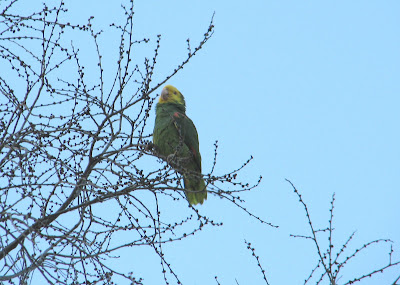 I knew Easter was off to a bad start when we saw the squirrels digging up & running off with the old folks' easter eggs next door (left out...2 days early.... for their incoming grandchildren). What the hell does a squirrel want with a pink plastic easter egg, anyway?
So, fast forward 48 hours.....I was out on the back deck talking to my mom (well, mostly listening to her bizarre rant about the latest job she is going to quit), when I heard a hawk call, followed by another LOUD bird call that I had never heard before (which is a little unusual).
Immediately, two large birds swoop directly over my head, and when I look up at them, I see a sharp-shinned hawk giving chase to a big fat parrot? or similar large green bird. WTF! After a couple of passes, the hawk pulls off and flies back down to the trees along the stream bank. The parrot/macaw/alien set himself up in the top of the tallest tree around and alternated between "Hellooooo" and this kind of retarded warble: http://www.youtube.com/watch?v=kC7-RqdIjAY&feature=related ; calling out to the entire neighborhood. I snapped a couple of pictures, and hit up "The Google" and determined that it's a double yellow-headed Amazon parrot. Whose natural range obviously does not include Central Maryland....as confirmed by The Google.

OK, so we are already at a "Double WTF" status here. The situation worsens (i.e. becomes more hilarious) when one of our really intelligent squirrels gets ticked off by the constant cackling and mistakes the parrot for another male squirrel. It charges up the tree to confront the rival, and when it gets about 4 feet away from the parrot, realizes that the "rival squirrel" actually looks like a gigantic hawk! And in a "My Bad, Homey!" kind of way, hauls ass back down the tree. The squirrel regroups, but then once the bird starts cackling again, instinctively charges up the tree again, until it has a good view of the big old bird (repeat freakout and retreat, then repeat entire process 19 more times). You can see the squirrel in this pic. I tried to take a movie but it was pretty worthless. 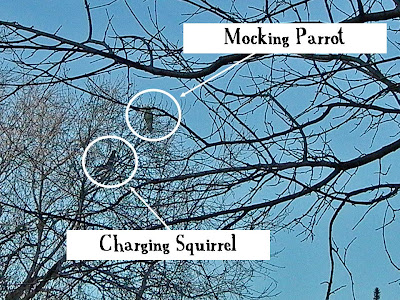 Tragedy (or additional wildlife-induced stupidity, anyway) was averted when a woman showed up with what we in "the industry" refer to as a "ginormous parrot catching stick" (just kidding, I have no flippin' idea what it's called), and the parrot climbed down to her shoulder on the giant stick. She was very proud of being the owner of a free-flying domesticated parrot. I told her that her pet was about 1 foot away from being Parrot McNuggets for the hawk - she did not seem to find my comment funny, or intriguing or ironic (the whole domestic bird vs. wild native bird thing).

I enjoy your Bay-focused blog so much that I'm going to make you work even harder by tagging you with a meme--to write a six-word memoir of your "inner birder," whatever that means to you. Here's a link to my attempt: http://pinesabovesnow.blogspot.com/2008/03/capturing-your-inner-birder.html . Best, Julie

I loved that story. I need a good laugh this morning. Troy