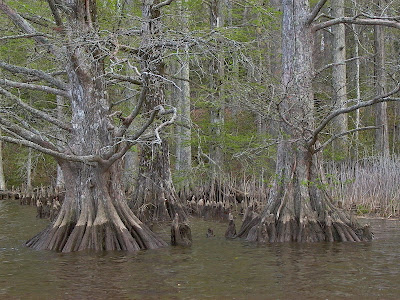 We had a brief warm snap, so it was high time to get back out on the water. Brother T was camping out on Chickahominy WMA in southeastern VA, only 2 counties away from where we went to high school. He leaves on monday for a 40-day jaunt on the Mississippi River, and I happened to be driving through Virginia on the way to some work events for early next week....so what the heck?

We got underway pretty early, dodging our 14' jonboat (the water is very shallow) among the yuppy jerks speeding up the creeks with their Tritons and Mercury 250's (it's a designated no-wake zone) as part of an unsponsored, unsanctioned, unadvertised bass tournament. They proved a minor annoyance all morning, primarily because their 2 foot wake (at 30mph in a no-wake zone) kept screwing with our attempts to fish topwater lures around woody debris, primarily fallen oak logs and cypress knees. One near collision between two of them was priceless, though (that would have been a pricy insurance claim!).

Anyway, the primary lures we utilized were the Rebel Pop'R, Heddon Zara Spook, Gitzit Little Tough Guys, various shad darts, beetle spins, and plastics (not worth mentioning because they didn't draw any bits).

Fishing started slow, but up in a deep cove we hit a mess of redbreasted sunfish, which was at least entertaining. We found several shorelines with severe erosion and deep channels immediately at the shoreline (thanks to the jerks in the bASS tournament), littered with floating woody debris and fallen logs. Fishing those structures with the three lures linked above drew out more red-breasted sunfish, a few bluegills, and a Hickory Shad. We fished around a fallen cypress tree in deep water and I caught a 2lb+ crappie, the biggest one I have caught in several years. 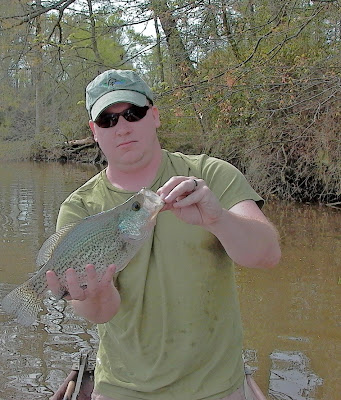 After that, we knew that some bigger fish were around, so we started covering big lengths of shoreline with plastics. The water was cloudy due to recent wind and rain, and we hit a lot of submerged snags and pulled in a lot of watermilfoil on our hooks. We hadn't brought any live bait because "we're sportsmen" (I love it when guys say that), but mostly because we didn't want to spend all morning trying to release 6" long gut-hooked channel catfish, which are plentiful in the tidal Chickahominy. No more big fish at all, and only the Carp and very small largemouth were jumping.

By about 11am, the predicted thunderstorms started lurking up in the creek, and the tide started heading out, so we motored back to the "campsite" (i.e. a patch of dirt in the woods). T's buddies were cooking up brats so I grabbed one and packed up the truck before the Old Testament Flood started. Despite the idiots in the $60,000 boats, it was a great morning, with great scenery in some really great habitat. And I caught and released what would have been a "citation crappie" (ha ha ha), so that's an extra bonus. 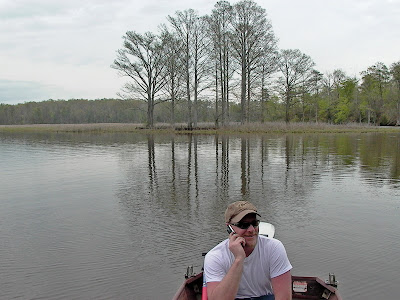 Idiots is too kind a name for the yuppie jerks.

Anyway, hope you had a good time. Sounds like fun.

And u had to post a picture of me on a damn cell phone.That's special ,well I guess it would have helped if i caught something over a half pound worthy of a picture.

Nice pictures. I miss the crappie we would eat at Grandpa's in the spring. He would fry them up in a beer batter and man was that some good eating.