The Freight Train of Spring 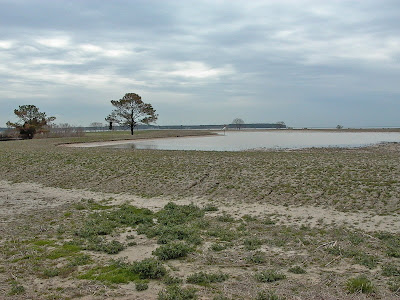 Just a few weeks ago, it seemed like spring was right on top of us, but still struggling. Now it's undeniably here, even if the weather is a little "Pac NW". I led a tour saturday of some wetlands we built in Fall 2007 (above). The folks who run that property are drawing down the water levels in the wetlands. This provides two resources - a nice ring of mudflats for shorebird and duck foraging, and also an impetus for wetland seeds to germinate in the saturated (but not flooded) soil. It will look so much nicer once it is full of thick vegetation.

Our bird list was pretty limited:
American Black Duck (flock of 8)
Mallard (mating pairs)
Wood Duck (mating pairs)
Greater Yellowlegs
Tern (unidentified)
Killdeer
Osprey (nesting)
Red-tailed hawk
Bald Eagle
A local resident who was on the tour commented that the black ducks were the first he had seen on the creek in 15 years. I was also hoping on a lot more songbirds, but I suppose it's still early. Once the vegetation thickens, the area should be full of woodcock as well.
Elsewhere, the "freight train of spring" keeps rolling here in USDA Zone 7. I will be publishing a post soon of unknown spring ephemerals that I planted previously (2 or more years ago), which didn't germinate in 2007, and have now come up....so I have no recollection of what they are.
In bloom this week at our place:
Spicebush (transplanted from southern Maryland, 2004)
Hyacinth
Grape Hyacinth
Ready to Bloom
Redbud (transplanted from western NC, 2004)
Redbud (nursery stock, MO, 2006)
Viburnum, Chicago Fire (nursery stock, NY, 2005)
Shadbush/Serviceberry (nursery stock, MO, 2006)
Germinated
Spring-planted Garlic, Chesnok Red
Tobacco, Havana (inside under lights)
Tobacco, Connecticut Black (inside under lights)
Tomato, Sweet Million (inside under lights)
Spring Beauties (transplanted from eastern TN, 2007)
at April 07, 2008

It's still early on the songbirds.

Even here in Texas, it seems to be a bit early for the birds though Spring is going full tilt now.

Man it is late here in the heartland for spring. Things are greening up but it is an average of 10 degrees cooler than normal. We would be eating morels by now in a normal year and not one asparagus tip has emerged. Oh well. MUD

It is going slow, that's for sure. We're getting a total of 48 hours of "average" weather, then another cold front on saturday.