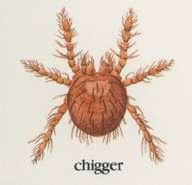 Well, another thing that should have come under the headings of "turkey habitat" and "oak-pine forest" is the phrase "excessive populations of invertebrates, including several species of ticks and chiggers."
Many of you northern folks may not have had the *divine* pleasure of experiencing a chigger bite. And for the record, they are like carnies, travelling in bands of thousands, and creating mischief and havoc as they go. So you never get "just one chigger bite."
So, what is a chigger? I'll try to describe it first, and then link some more reliable information! Chiggers are just larvae of normal forest mites that you see crawling around on leaves and plants. During the larval stage, they bite (and chew) on anything with warm blood. They really love sick or wounded birds! I've always been told (read: you better research this yourself) that humans and chiggers are very negatively reactive to each other, meaning that when a chigger bites you, your body responds with antibodies that probably kill the chigger within hours. However, the chigger's saliva in your skin causes all hell to break loose, causing a typical "bug bite." Unlike a tick bite, there's nothing left. Just chigger spit. How scientific was that?
OK, OK, try this from the Roger Tory Peterson Institute of Natural History:
As already pointed out, it is the saliva of the chigger that causes the intense itching, not the animal itself. But, the worst of the itching isn’t felt for up to 24 to 48 hours after exposure – long after you’re away from the infection site. Once you begin to notice the itching, the mites are often long gone and no longer an issue so the common practice of applying clear fingernail polish to kill the chiggers is pointless. Knowing this delayed time from attachment of the chigger to itch is helpful in figuring out where you were exposed to the chiggers and thus makes it possible to avoid or take remedial action in the future. 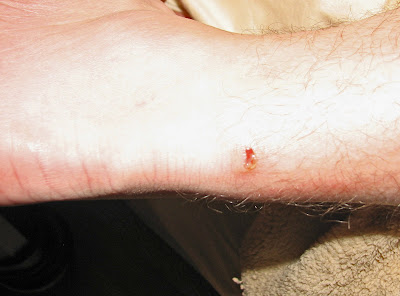 Left knee (9 bites)
Left achiles (1 bite with secondary infection - shown above)
right pectoral (3 bites)
left armpit (1 bite)
I think we will be sticking to fishing and surfing for the next 4 months!
at May 16, 2008

Once in Wyoming, I saw a young girl sitting in the grass with shorts on. I said to her she will get chiggers. "Oh, you cheeky yanks just love to pull the leg of tourists." was her reply. I said suit yourself. A litle later on I was visiting the toilet and the wall didn't go all the way to the ceiling to facilitate ventilation. I heard that little girl say to her mother, "Mum, me Bum itches". All I could do was holler, "Chiggers". MUD

File under the heading of "seemed like a good idea at the time."

I've not had the privilege of a chigger bite - ticks are out in full force, though over here. We'll let y'all keep the chiggers.

are you sure about not using the the finger nail polish cure? Some people I know swear by it...never had 'em myself.

Shudder. We were out today and pick up a Tick. No chiggers showing yet.

I try to visit regularily,
but don't always leave comments.
Too many good blogs,
so little time.

Well, mud chiggers hate gasoline, and you can use gasoline to kill regular chiggers, so I guess they are similar in that way.