Fishing 99 to Life at the Foothills Prison! 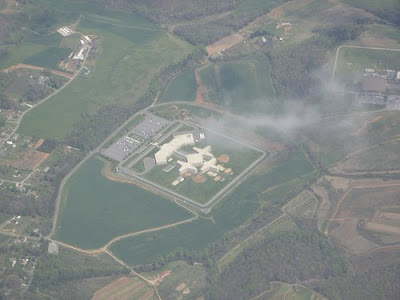 In the past, I've been very pleased with myself for my ability to find, fish, hunt, and hike places where other folks haven't been. When I checked the NC Wildlife Commission home page, I found a new spot, recently turned over to the commission from the NC Prisons Commission.
Brother-in-law Preston and I headed down there this morning to see what it was all about. Threaded inbetween the maximum security prison and the juvenile detention facility was a small gravel road which leads to two ponds. We set up with my favorite indicator lure (gitzit minnow, chartreuse/white/silver) and Preston's favorite indicator lure (white and gray rooster tail). Right off the bat it was pretty obvious that the ponds get a lot of fishing pressure. We had panfish and small bass repeatedly following and attacking our lures, but with some real hesitation. We switched up lures repeatedly and were hitting structure (mostly logs and stumps in depths of 4 to 6 feet. Fish were interested in surface feeding, but not feeding on any of the floating spinning flies, poppers, rapalas, or other surface lures we had (and we had plenty). I think traditional fly fishing or straight up bait fishing (bobber and all) is the call here. In fact,
Fly Fishing Magazine has already been there and done that. 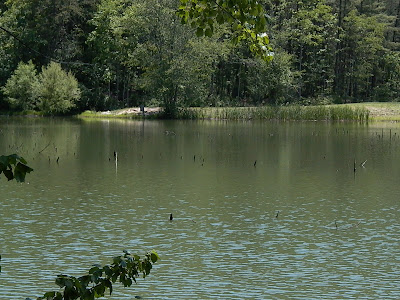 There was a deep channel between the two ponds with a lot of woody debris in it. I also saw a lot of fish moving in it, and tried my luck. On about the third cast, I came up with a 13" white catfish, which I released back into his swampy hole. 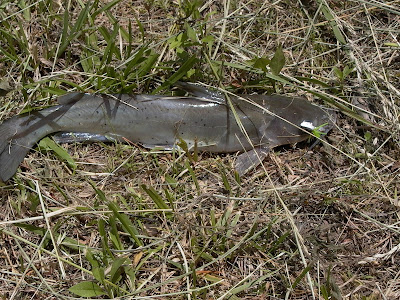 I was a little disappointed by the amount of worm containers and beer cans laying around (seeing as how this is state property NEXT TO A PRISON). Nonetheless, it was a super laid back morning and we caught a few fish. Sounds like a good day to me.
at May 24, 2008