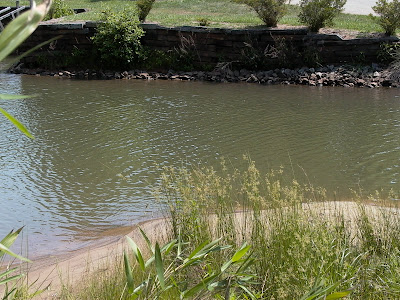 Got an opportunity to fish a point bar on Lake Hickory, an impounded section of the Catawba River. The spot was hooked up by friend Rob and his son Alex. Water was a little cloudy and the only serious action I got was from a rubber frog lure, which the fish would only attack when I allowed it to settle to the bottom, and then jerk in. Rob and Alex stuck with live bait and had only a little better luck (catching white perch and redbreasted sunfish). A quick walk up a tributary revealed why - wall to wall sunfish and bass nests in shallow, warm water. The spawn is on! I would love to be able to say that "I don't pursue nesting fish because of ethical reasons" but the truth is that I have always found spawning/nesting fish to be extremely fickle and more difficult to catch than even deep winter fish, so I generally just leave nesting fish alone. 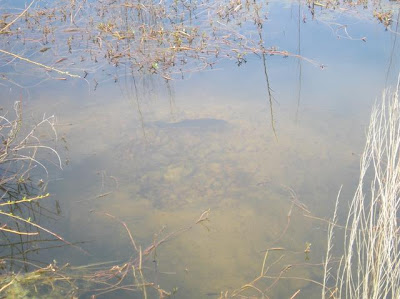 Very slow morning but it was great to be fishing with no deadlines, no traffic waiting, and nowhere else to be! 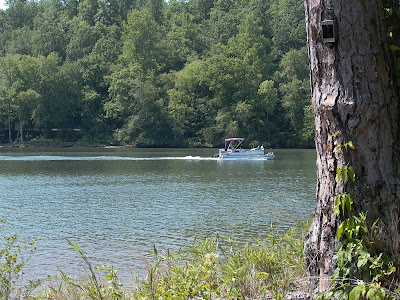 This Boomhauer - type individual kept hauling ass up and down the lake in his totally awesome pontoon boat from 1977! Don't scare them danged ol' bass, ol' boy! At least once the pontoon boat sinks, there will be a little bit more submerged structure out there for the fish.
at May 27, 2008

Your last sentence summed up a good fishing trip in my book! Sounds like a good time!

Can we say redneck tard club to the pontoon individual?

Tom - it was great to NOT think about work for several days in a row.