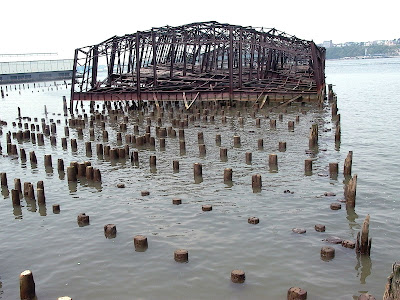 We just returned from an exhausting trip to NYC, in honor of my grandmother's 90th birthday. The travel was reasonable - we drove to central NJ and took trains, subways, and taxis from there. Gas is $4.59 in NYC (and parking is $30-$40/day), so.....yeah....the train it is!

Many of our family trips to NYC have been extremely hurried in the past, trying to see everybody and do everything. In addition, several friends have relocated businesses or their whole lives up to NYC, so there are more people to see in the city every year. In some ways, this is great, because we always get to go back to our favorite restaurants, particularly Hill Country BBQ, Mama Buddha, and Wiggles (ha ha ha).
Outside of these constraints is the fact that New York City is a fascinating place for anyone who enjoys observing nature. Of course, I don't mean undisturbed or pristine nature, or even nature that is clean enough to touch without gloves. But nature abounds in the City, especially in the rivers and islands immediately off of Manhattan. The natural history there, certainly of the last 150 years, is one of tolerance to all kinds of human activities, from wetland filling (all of southern Manhattan was coastal marsh prior to about 1840, when it was filled in with rock), to livestock operations (Central Park was full of hogs until the late 1800s), to disease, rats, and overpopulation. SOUNDS FABULOUS!
But....what to make of the stuff that can still survive there? 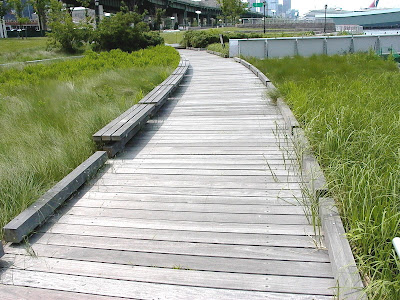 Healthy beachgrass and decked walkway in Riverside Park
I would really like to tour and fish the outlying islands of the City, but I had never kayaked either the East River (a death wish anyway, between vicious currents, strong tides, and heavy boat traffic) or the Hudson River (just heavy boat traffic and strong tides). Well, apparently, the Downtown Boat House has a walk-up, free kayaking program in mid-town on the Hudson River, along Riverside Park. I was pretty skeptical, since 1) nothing in New York is ever free, and 2) how badly do I really need to catch hep-A from the Hudson River? And 3, their pier is between the NYC sanitation pier (where they load trash onto barges) and the Carnival Cruise Line Food Storage Pier.....lovely scenery..... 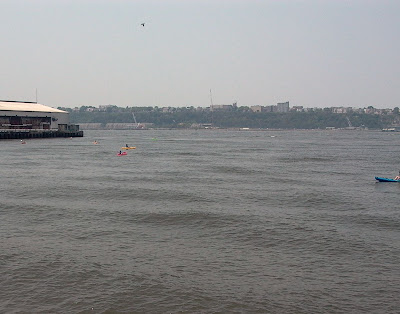 Kayaking in the Hudson River between Manhattan and Union City, NJ

But I walked up and the Boathouse's volunteers were really nice. They hooked me up with a cheesy (but clean) sit-on-top kayak, and some busted up paddle missing a hunk out of the blade. Whatever......free. As soon as I started paddling out, I saw a floating surgical glove and got a little freaked out, luckily there was no more sketchy trash out in the water. I was able to get out about 800 or 1,000 feet from the dock and kind of feel out the magnitude of the currents in the River. The outgoing tide was no joke! I stayed out in the water for about 45 minutes and finally decided that I had maximized my potential exposure to all things contagious and microscopic, so I decided to head in.

Both the Hudson River and the East River are full of abandoned piers. These areas, as you might learn from Mike Iaconelli's City Limits Fishing , present fish and critters with some decent habitat. To you and I, it's a pile of rocks, but to a blue crab, it's a reef. Here's one of the most amazing spots I found....the historic Longshoremans Pier (Pier D). The water is about 15 feet deep...true benthic habitat. 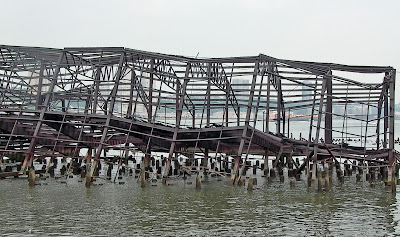 Now granted, you would lose a lot of fishing tackle in the "neutrally buoyant" flotsam and jetsam underwater, but you can't tell me that this structure does not hold big fish! The pier was the last on the Hudson River to be operated by longshoremen, and not by rail operators. It burned and halfway sunk into the river in 1971, and a 2003 demolition project was halted in an effort to preserve this small hunk of the City's Marine Trades industrial heritage. I'm glad they kept it!
at June 17, 2008

It's crazy how a big city will try and save a big burnt up pier jsut to preserve heritage.