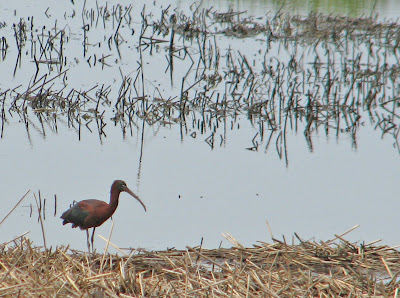 An undocumented, possibly enemy combatant (African) Glossy Ibis hunts fiddler crabs at a restored marsh in Delaware. Yes it's blurry - the humidity was at about 2,000% yesterday! Everything was coated in steam.
Not to take the homeland security issue lightly, but in my line of work I am regularly faced with dilemmas about wildlife management practices that deal with non-native species. The local game or wildlife managers usually say things to the effect of, "We used to increase bird use by (name a habitat practice), but we had to stop that completely once the (name a plant or animal from Asia) showed up."
Often, these invaders show up as giant frogs or 16 foot tall grasses, or 45' long vines. But peoples' thoughts change once the subject is a little "cuter." There are many, many examples, but while touring several of our recently restored wetlands yesterday in Delaware, I saw two of these species in particular, the glossy ibis (above), and the cattle egrets (below), both recent arrivals from the west coast of Africa. 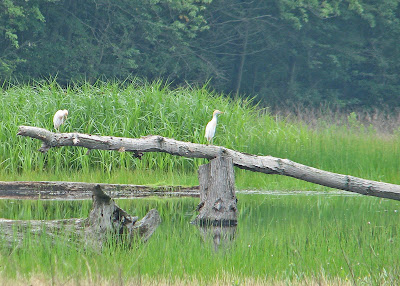 Two cattle egrets (both dark phase adults) hunt frogs and tadpoles at a recently restored freshwater wetland in northern Delaware. We dragged those logs and stumps out there with bulldozers!

So how did these guys get here? The current speculation is that both species were blown over during hurricanes in the mid to late-1800s. Neither have truly become "invasive," and in recent decades, both species have settled down into their own niches, existing in moderate numbers on the east coast. Both are colonial bird species, establishing rookeries in wildlife refuges in the northeastern United States. Neither seem to be overly destructive - the glossy ibis targets wildly abundant fiddler crabs for food in brackish marshes and impoundments, while cattle egrets prefer to associate with livestock and pick bugs off of the large mammals.
So what can be done? Really - nothing. Migratory birds move naturally. Sometimes storm events move them out of their range. Hawaii is a good example - many of the birds now common to Hawaii blew in on storms over the last 1,000 years. What we CAN do is encourage people to not manually move birds, because those coddled, enabled movements cause ecological problems like those associated with the mute swan, house sparrow, starling, and many others.

Yes, for the most part birds are nice to add to the new environment. There are a few disasters such as the snakes from Thailand getting to Guam and almost eliminating the bird population. The cane toad invasion of Australia, the wetbacks into southern California. No, no, no, they owned that before we did so as far as I am concerned if they can afford to live there they are welcome "there" MUD

We call them F.H.D.M.
It stands for Future Home Depot Management. They can take over a local species (snakes eat birds) or a local job market (construction/ labor agriculture).

Awesome. My first ever Klan thread.

Only problem I personally have with immigrants is the fact that they are not learning American laws (more than not learning American english). This makes it less safe when I hunt, because they are willing to poach (no such thing as private property in China). This makes it harder to fish, because they often keep every single fish that gets hooked....legal or not...until the cooler is full. I don't know if it's because it's not a high priority for them to learn this stuff, or because it's not a high priority for us to teach it to them. Frustrating.