No, You Do Not Need that New Carbon Fiber Rod 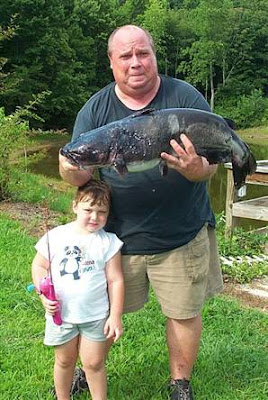 (From WNCN, Raleigh)
WILKES COUNTY, N.C. — A backyard angler has bagged the state’s record channel catfish using a 2½-foot hot pink Barbie Doll rod and reel.
David Hayes caught the record-breaking fish from a private pond while fishing early this month with his granddaughter, Alyssa, 3. The 21-pound, 1-ounce catfish measured 32 inches long — 2 inches longer than the Barbie Doll fishing pole. “After catching two or three bluegill, Alyssa turns to me and says: ‘Papa, I’ve got to go to the bathroom. Hold my fishing rod,’” Hayes was quoted as saying in a news release from the state Wildlife Resources Commission.
“A few minutes later, the float went under, and I saw the water start boiling up — I knew right then that I had my hands full with that fishing rod.”
It took Hayes about 25 minutes to land the fish, which measured 22½ inches in girth. Hayes said that once he got it to the bank, he was pretty certain his channel cat would exceed the previous state record, an 18-pound, 5-ounce fish caught in August 2007.
The fish was weighed on certified scales at a nearby grocery store, and a fisheries biologist with the Wildlife Resources Commission certified that Hayes was right. — WNCN, Raleigh, N.C.
at August 22, 2008

That is great! LOL!