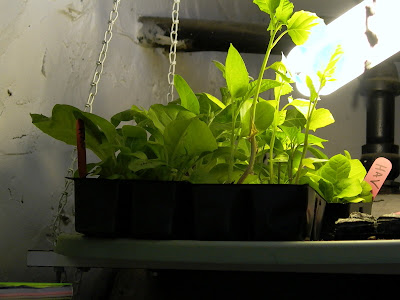 At about 4", around May 1, seedlings were transplanted outside to an area with morning sun and afternoon filtered sun. About half were planted in a 50-50 manure-soil mix, and the other half were planted in a 50-50 compost-soil mix. The plants in manure grew larger, faster, with larger leaves, and seemed to be slightly more resistant to cutworms. When growing tobacco in the past, I had always used a strong manure mix in the soil. Tobacco is a very needy plant from a soil chemistry standpoint. 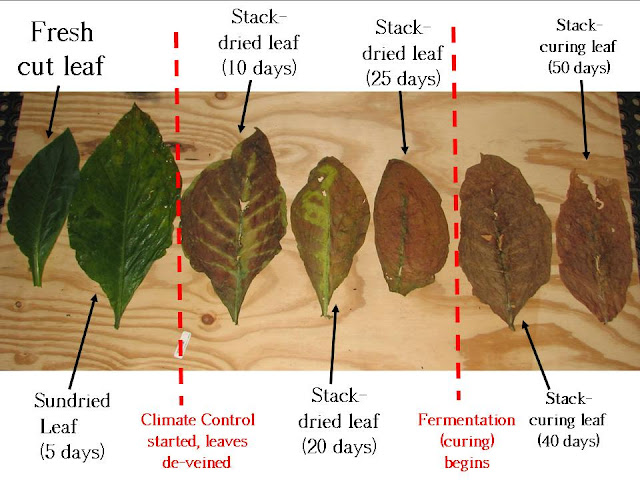 A few of my leaves! 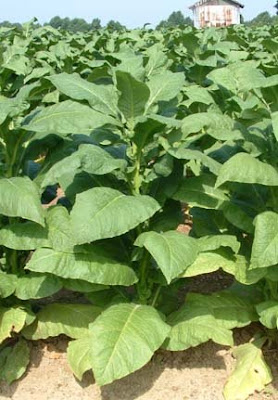 So....this year we grew tobacco again. It generally went well. Around March 1, we started with seeds in peat pots, of the following varieties:

.
By July 1, there was distinct separation in the vigor of the plant varieties (see the bullets above). Havana plants featured thick stalks, healthy terminal buds, and great leaf size and distribution. And of course, no fungus and few insects.
On August 1, I started cutting the lowest leaves off of several plants. I dried them first on a glass table in the sun (3 days), then hung them from a line in the shade for 4-5 days. Once the leaf edges were really starting to dry, I brought the line of leaves in, and de-veined the largest leaves (that could possibly be used for cigar wrapper or binder).
.
After another week (leaves fully brown and supple but dry), I laid them out on a slab of oak, piled in a stack. As I've continued to cut more tobacco (starting to harvest entire plants now that it's September), I am stacking the semi-dry leaves on top of the stack of drier leaves.
.
As a result of that, the strangest thing happened (my improbable goal): fermentation is occuring! The drier leaves are precipitating ammonia and tar, all without drying any further. Perfect! Well not quite - as you can see in the diagram above, the curing leaves are experiencing some shrinkage....we'll work through that!
.
Here's the guide I've been using - the 1962 guide to Cohibas Cubana:
The leaves are tried into pairs and strung onto long poles. These pairs of leaves are called palmas. The palms are hung on poles that are progressively moved to the top of the drying barn. The entire drying process takes about 45-60 days. During this drying period, the leaves turn from green to yellow to dark brown. During the entire drying process the leaves are carefully watched so they will not try too quickly and lose their precious flavor giving oils. Workers keep a close eye on the ambient temperature and humidity, as well as rainfall. Doors and shutters are opened and/or closed accordingly.
When the leaves are cured or dried, they must be fermented. This is usually done twice, with the exception of leaves destined to produce the Cuban Cohiba which is fermented three times. Two fermentation's take between 30-90 days depending on the class of tobacco. In the process the leaves are carefully and individually laid upon each other into a pile.The pile is called a burros and is covered with cloth. Tobacco is moistened to 25% - 30% humidity. This reduces resins in the leaf and they attain a uniform color. In the second fermentation the leaves are moistened with a proprietary mixture of water and tobacco stems. This is a more aggressive fermentation which removes odor and some gases. This reduces ammonia and nitrogenous gases (molecule of nicotine).
at September 03, 2008

What do you do with the tobacco when it is finally done? When we lived in Leavenworth, one of the guys I knew worked across the river in Missouri and they grew and harvested tobacco. One time he was really sick from Nicotine poisoning. I ma not sure at what phase in the project they were in. I think he was harvesting on a really hot day and took off his shirt. I smoke one cigar a year on my birthday (or near it) MUD

It's all about cigars. I have an old wooden cigar mold that I use. Nicotine poison killed a lot of children. In the days before "the patch," people didn't understand that nicotine can work through your skin. A lot of child laborers have died from picking tobacco after rainstorms. The nicotine gets concentrated in the droplets, and then goes right through your skin.

Nicotine, like THC in marijuana, is a natural insecticide, meant to protect the plant from insect infestations, hungry deer, etc.