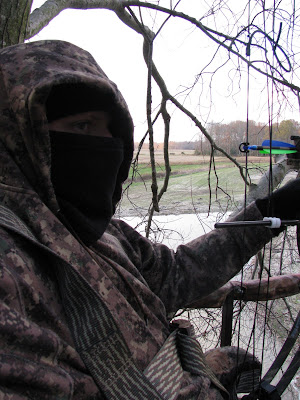 Still chasing the herd on the same farm. And suffered a loss at the hands of one of the most obvious rules in the outdoors - "stick with your plan until you are SURE it will fail. Change up early, and both the old and new plans are nearly guaranteed to fail."

So that's what happened. I knew from scouting that the deer were likely to use a field I'd already hunted. Problem with that hunt was that they use the field in the evening, and I was hunting in the morning. Well, here was my chance for an evening hunt. Just stick with the program.

Instead, at the last second, I broke towards one of the rear fields and a seldom-used stand because I had seen a large number of tracks through the harvested field. I had no recon on exactly WHEN those deer were moving through, but .....I don't know, I can't explain it. I was drawn to that field.

A number of factors, namely a stiff headwind that pushed my scent into the woods behind me, did not help with this hunt. Then again, I woke myself up snoring at one point around 4:30pm, so who knows? A cold snap was settling in and the deer SHOULD have been moving, but shooting time ended and I hadn't seen a single deer - a rare occurrence for a deer hunt in Maryland. I removed my arrow from the nock, loaded my pack, and climbed down, ready for the hike back up to the front of the property (and past the stand I meant to hunt). By this time, it was really dark, but there was a little moonlight.

As I crossed the front field and looked across it toward the area of the other stand, I saw 30-40 large "bumps" in the dark field. Since the field was harvested recently, and since the crop was soybeans, there should have been NO rise and fall in that field. I stood still and looked out into the dark. The bumps began to move - at least 30 deer, over 100 yards out into a field, in an area where they would have had to walk right past the stand I had meant to hunt. The fact that they were so far out in the open, 20 minutes after shooting hours ended, means that they were certainly rustling around on the woods edge (location of the stand) much earlier than that.

Don't worry about it,we all make mistakes.Here is an idea,call Duckman Dumbass and ask him where the deer are.