Getting My Head Straight 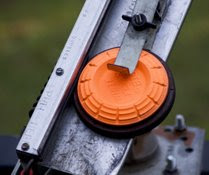 Went out with some fellow biologists for a few rounds of wobble-stand today. I've had one decent hunt, and several where I haven't fired a shot, and the late season (Dec 18 to Jan 24) hasn't even started, so time to brush up. I also recently acquired a Browning Gold Hunter 20 gauge and haven't had a good opportunity to really work with it. It's a beautiful firearm and, weighing in at about 6.25 pounds, I want to get used to shooting dove, teal, skeet, and (if I'm good), trap with it.

Now, bear in mind that I'm only an "average" shot (usually score 12 to 20 on trap, lifetime high 24), and that I have several basic shooting issues that I've been working on for about a year, namely, cross-eye dominance and follow-through issues. Oh yeah, and I've never shot trap with a 20 gauge before.

So four of us went down to Loch Raven for a few rounds and the club members were hospitable as always. It's a great "middle-of-the-road" facility, offering $5.75/round ($15 to $50 for 2 rounds is typical around here), a modest clubhouse, and snacks, drinks, cigars, and shells for sale (and they take plastic). And it's 15 minutes from home.

I took a really low-stress attitude and tried to get used to the little gun. Of all things, I found myself shooting significantly behind the clay. Worked really hard on keeping my face right on the barrel, which I think is why my shooting improved each round. Results? Drumroll.....

I need a lot of work on this but it could have been worse, and the gun was like a dream! After 3 rounds we packed up and got some grub at Andy Nelson's BBQ. Got home, watched my Hokies win the ACC Championship, and it started snowing. Sound like a fine December saturday? It was - you shoulda been here.

Swamp -nothing like a little 4/20 to humble the soul! That is a really nice gun. Depending on what you are used to shooting, you might be swinging ahead of the target with that light gun. Just a thought. Sounds like a wonderful day out.

I'll get used to it. Shoots like a dream (it just "feels" right). If I shoot waterfowl with it, it will definitely have to be hevi-shot. The gun doesn't even take 3" shells - which might be why the guy sold it to me so cheap.

Indeed that is a sweet gun dude.To bad we don't have any public trap and skeet places down here.It's either miltary or rich people in clubs.

On of my co-workers goes up to the Resovoir to shoot sometimes, I always meant to go. I heard it's real cheap.

Anytime anyone can shoot and improve at every round I consider good shooting.

There is nothing like that new (or secondhand gun) smell. I have a newly acquired .243 that I have to pull out of the closet from time to time and fondle. LOL!

A round of trap here is $3 for non-club members and $2 for club members!

20 with 2 3/4 inch shells should be fine if you use Hevishot and keep your yardage low. I shared a blind with a kid on youth day a few years back and he pounded the mallards with his 20.

A lil' jealous. Maybe I can check out that pistol range that clays on Tuesday evenings near my casa....

Posted on my blog-en-heimer tooooooo.