First and Last Diver Hunt of the Season 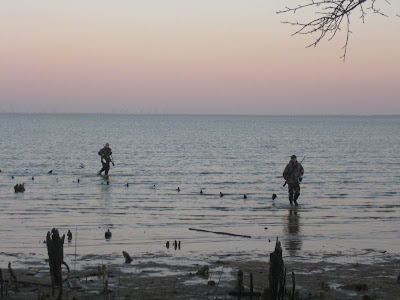 Bringing in the gang rigs, January 2009 I love hunting diving ducks for several reasons. First, hunting takes place out in the salt marsh, oyster beds, and open bays, the types of places that I refer to as "home." Second, the birds are, or used to be, plentiful, and fly all day up and down the coastline. Third, the first several "private" duck hunting spots that I locked up as an adult were diving duck spots, which means that it's the part of duck hunting about which I know the most.
.
Unfortunately, it's gotten a little complicated lately. Our primary diving ducks (canvasbacks, redheads, and bluebills) are all having their own issues, and our bag limit until January 2 was restricted to 1 redhead, 0 canvasbacks, and 1 bluebill. Add that to the issue of the still-thawed Great Lakes and Finger Lakes, and you have a lot of constraints on what historically was a gear-intensive, but productive and fun hunt. Tug and friend Aaron, hunting an oyster bar for buffleheads and bluebills.

A last minute business trip in the middle of January sent me to Virginia Beach, and despite the full moon, 45 degree bluebird weather, and unpredictable diver flocks, I called Tug to set up an afternoon diver hunt. We set off in his buddy Aaron's boat, since our boat The Shocker is having outboard issues that make it incompatible for an open-bay run. We set off with about 5 dozen bluebill and bufflehead decoys, 2 dozen black duck decoys, and some goose floaters. "Be Somebody Beach" in a January sunset.

On our trip across the channel, we noticed that the problem we predicted - the large flocks of wintering divers had not yet arrived - would be supplanted by a new problem - the flocks - around 10,000 bluebills, scoters, and buffleheads, had arrived in the last 48 hours, and were hunkered down in the middle of the channel, about 800 yards offshore of our hunting spot. There was absolutely nothing we can do about it, so we went through the motions, put out lots of decoys, got the boat wedged up in the marsh, and enjoyed the mild, sunny afternoon.


.
A few stray pairs of buffleheads came by to check out the decoys, but the hunt was basically a bust. As we dragged the decoy rigs (15 decoys per rig) back to shore after shooting light, dozens of small flocks followed the lines of decoys all the way to the beach. At the end of it all, we all had a relaxing weekday afternoon on a decent beach in January. No gear, dogs, or hunters were banged up, and we retired back to Tug's residence, to be joined by The Nuttiness, for a warm bonfire and to tell tall tales. I've had worse mondays.

HAHAHA the Shocker!Yeah well I have had worse Mondays