Now, Woodcock Walk It Out American Woodcock
.
I was at Chincoteague National Wildlife Refuge for work today, and despite the wind, I managed to see some pretty impressive wildlife. One was this fella, who was hunkered down on an asphalt service road, trying to keep warm. When our truck approached, he launched into his dance (see also below, and the movie link below).
.
The little woodcock is a bit of enigma in several ways - primarily because it's a shorebird that lives not on the coastal mudflats, but in the forests, more specifically, shrub wetlands, and even more specifically, wet alder thickets where the soil is still dry enough to support earthworms...the woodcock's favorite food. The greatest threat to it are the loss of habitat to humans, followed by the natural succession of shrub habitat into mature forest habitat (which holds more woodcock predators). The natural pattern of forest fires on the east coast has been so disturbed that natural shrub habitats are becoming pretty rare, as they age and are taken over by aggressive tree species.
.
The American Woodcock is basically restricted to the eastern half of the United States, where it's still occasionally sought out as a high (culinary) quality game bird. Males are territorial and female birds visit the nesting territories of several males each spring before choosing one for a nest site.
.
So what's up with that crazy strutting dance? There are two theories. One is that the dance evolved from a male vs. male territorial display into a mating display. The other is that the dance evolved from a feeding behavior (shaking the ground to stir up more delicious worms) into a mating display. Regardless, I give, you, the strutting woodcock. And you can watch a video here.
And this video's even better.
at February 24, 2009 3 comments: Links to this post 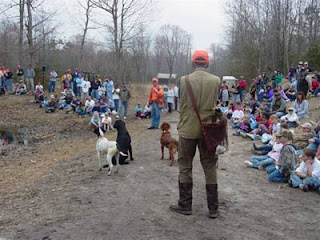 Potomac River @ Mouth of the Monocacy River (Maryland). While many Marylanders were sympathetic to the South (and disruptive to the Union forces), Maryland was technically a Union state. During much of the Civil War, the Potomac River divided the "two Americas." Union artillery positions at the Monocacy Aqueduct, erected after the second failed sabotage of the aqueduct by Confederate troops (Antietam Campaign of 1862) Site of the Battle of Loudon Heights - Mosby's Rangers vs. Cole's Maryland Union Cavalry (1864). The site was used by Stonewall Jackson in 1862 to firebomb the town of Harpers Ferry, West Virginia. The final concoction - Jamaican Jerk rub
.
It's truly slumber-time right now - the weather is generally cold, and like every year, I'm using the time from about Feb 1 to April 15 (most futile time of the year for fishing, hunting, surfing, and kayaking) to get my life in order, be a good husband, and tie up old projects that just won't die. Old projects like using my dried scotch bonnet peppers ('member those manure-raised organic beauties?) from 2008 in one of my favorite seasonings, Jamaican Jerk.
.
Jerk is great because, beyond being a wonderful seasoning, it evokes so many great memories from my life. From beachside blackened shrimp in Virginia to the Oistins Fish Fry in Barbados. Good, warm, happy times. Which makes this a perfect project for February. Jerk's primary ingredients: scotch bonnet peppers, brown sugar, and allspice.
I used a common recipe from the Interwebs and changed it to fit my style a bit. It's posted below. While my skills pretty clearly dwarf those of your hosts at Hunt, Eat, Live! and Hunter, Angler, Garden, Cook, I cooked "professionally" at several restaurants from age 15 to 22, so I at least know my way around a kitchen.
.
Some notes: use care when handling habaneros and scotch bonnets. Do not use fresh peppers - dry them or lightly roast. Remove the white filament or placenta, and "most" of the seeds, even if you love spicy foods. The skin and a few leftover seeds will give you plenty of heat, especially after your Jerk has sat around and marinated for a few days. When the skins are dried, crush them however you like, but be aware that you will be creating pepper dust. If you don't believe me, try it. You'll see. Crush the skins in a well-ventilated area, let's just say it that way! When I catch my first rockfish of the year....you already know how it will be cooked!
at February 09, 2009 5 comments: Links to this post