Scratch What I Said About Forecasting Data 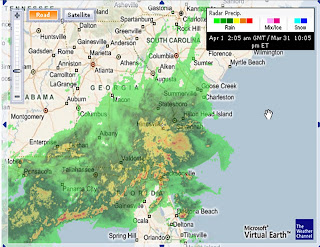 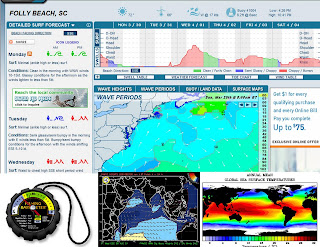 A few data products, including an interpolation of the Navy W3 Wind/Wave Model (top), Fishing Barometer (lower left), Navy FNMOC Model (lower center), and Sea Surface Temp Map (lower right)
.
So, we are preparing to depart for South Carolina's "Low Country" in a few days. Chief among our concerns (well, perhaps secondary to "will we still be employed when we return?") are

Due to the many data products available on the internet, many of them totally free, we can get a "pretty good idea" of what's in store for us. Those of you who write or read blogs like this undoubtedly use this data to plan your own trips and outings. I'm just old enough to remember how "it used to be," and to have witness how fast it changed.

In the summer of 1994, I was 20 years old and living at the beach. I had a pretty easy job at the local Air Force Base, and lucky for me, that job ended promptly at 3:30pm every day, allowing me enough time to run down to the beach for a few hours of surfing with 100,000 of my closest friends (ahhh, Virginia Beach in the summer). How did I know it was worth the 20 mile, 45 minute drive and feeding the meter on 4th Street? Well, I would watch the weather channel during my lunch break, and see what the wind was doing. There was no internet surf forecast or report of any kind available, so if I was lucky, I could call one of two local surf reports (WRV and 17th Street), and if the line wasn't busy, and if they had bothered to put down the bong long enough to record an afternoon update, I "might" have an idea of the surf conditions. "Might" because the WRV report was overly cynical, "Virginia Beach sucks today, just go to North Carolina," while the 17th Street report was overly...just over the top..."Yeah buddies, it's 7 foot and clean here on this 95 degree day with no storms or wind. Get down here and shred some waves, and remember to stop by the shop for some neon muscle shirts on your way home, COWABUNGA!"

UGH. Needless to say, you could hear both of those reports on an afternoon where a ridable 2 foot wave would come in about every 15-20 minutes. Fun times, and worth going, but not really exciting.

Fast forward to Summer, 1998. Doing my Masters internship at the Old Dominion University Coastal Lab working most days in Norfolk, VA (about 18 miles from the oceanfront). Now, armed with almost daily access to internet marine forecasts (NOAA), the USGS Tide Prediction Website, and the US Navy's FNMOC Wind-Wave Model, I could actually have a much better idea of what awaited me at the beach after work. It was occasionally wrong, but I saved myself many worthless drives, and also, when conditions looked promising, managed my work days to allow some flexibility toward the end of the day.

But data isn't enough - data by itself lends people to "cyberscouting," which has gotten to be a huge problem in most outdoor sports (and a topic for a later post). Folks using "remote data" ranging from Google Earth to raw weather data have been getting themselves into pretty rough situations all over the world by not having one of two critical items that should be on every outdoorsman's and outdoorswoman's list:

So for this trip to South Carolina, I've got a little bit of both of those - this is our third trip to the "Low Country" in four years. All of those trips have been between January and mid-April. So hopefully? I'm right on the money. Here's what I'm interpreting so far:

The Assateague Ponies - Pirates or Pets? Chincoteague Ponies forage on grasses managed for bird forage
.
During a recent trip to Chincoteague National Wildlife Refuge, we ran into the ubiquitous Chincoteague Ponies. These guys are common sights on the beaches, campgrounds, and roadways of Assateague Island (the southern half of which is designated as Chincoteague NWR). We grew up vacationing at Chincoteague, and the origin of these wild horses seemed pretty mysterious. No other wild horses exist in this part of North America, and in fact, the last horses native to North America went extinct at the end of the last Ice Age, between 12,000 and 10,000 years ago. The Chincoteague Pony - a recognized breed of horse - only grows to the size of a pony due to some very harsh limitations of food and nutrition in its habitat. So where did the Chincoteague Pony originate?
.
When we were kids, the absolute most exciting explanation, repeated so often that believed it was fact, was that the ponies had survived a brutal shipwreck of a Spanish galleon in the 1600s, swimming to shore on the island and living in peace and harmony forever and ever. Make no mistake, many ships have been grounded on the sandy shoals off of the barrier island chain from Long Island, NY to Cape Fear, NC; and some of coastal North Carolina's wild horses may indeed be the majestic descendents of shipwreck survivors - although they could just as easily be the wild descendents of herds imported and maintained by the early English settlers.
.
However, the origin of the Chincoteague ponies is far less exciting. In the late 1600s, King Charles II instituted a per-head tax on livestock maintained in the English Colonies (including Maryland and Virginia). My first guess is that this tax was meant to get a better inventory of the colonies' livestock resources and determine whether colonists were illegally trading livestock to Native Americans or to other Europeans (the colonists were doing both). In an effort to evade this tax (and oversight), and consider their lucrative trade outside of the purview of the British Empire, a group of wealthy colonists barged their horses, pigs, and cattle over to the remote barrier island of Assateague....population zero. Inbetween Assateague and the mainland was Chincoteague Island, a fishing village built on an ancient oyster reef.
.
As the years passed, the horses, generally assumed to be of Spanish lineage, continued to multiply and enjoy moderate lives on the harsh but predator-free island. Ranchers organized annual events, called "Pony Pennings" and "Sheep Pennings" to cull the herd and sell off young animals. The livestock were generally rounded up, forced to swim across the marsh to Chincoteague Island, and auctioned off. Those animals not sold were released back to Assateague. After several destructive fires on Chincoteague, the Chincoteague Volunteer Fire Company began sponsoring the Pony Penning and Auction in 1925. Nowadays, this popular tourist event takes place in the last week of July (during the Firemans Carnival), when the horses are corralled off the island, across the channel, and onto Chincoteague Island. They are inspected by veterinarians, and allowed to rest and eat in pastures until the next day's auctions. Perspective buyers must show proof of their acreage & ability to care for a pony, and must submit to an inspection of their horse trailer prior to the auction. The number of ponies corralled for the "Pony Swim" is based on the goal of keeping 120-150 ponies in the Assateague herd every year. Where did that number come from? In 1943, the US Department of the Interior purchased the southern 1/3 of Assateague Island, naming it "Chincoteague National Wildlife Refuge." After dozens of beach homes north of the Refuge were destroyed in 1962's Ash Wednesday Storm, the National Park Service purchased all land between the Refuge (to the south) and the Maryland-Virginia border (to the north), christening it as "Assateague National Seashore." The state of Maryland eventually followed suit, protecting the island from the state border to Ocean City Inlet (which had blown itself into existince in 1933). This property is now known as Assateague State Park (one of the highest rated state parks in the country).
.
For the first time, wildlife biologists and the general public were able to observe the effect that the ponies have been having on their habitat. It was evident that the horses were overeating their forage every single year, which led to bouts of herd starvation. In addition, very little fresh water is naturally available on the Island (this has changed with the construction of freshwater wetlands for waterfowl and shorebird management), and the horses are subject to brutal infestations of intestinal and mosquito-borne parasites. The pony herd would swell into the thousands, only to be quickly reduced to a few dozen individuals a year later. It was established through an extensive study by veterinarians, horse specialists, and habitat ecologists, that a healthy herd would be composed of roughly 120-150 ponies in Virginia, and an additional 150 ponies in Maryland. A herd of this size, it was determined, would have a manageable (not negligible) impact on the native habitat, and would be at minimal risk for herd loss due to disease outbreak.
.
As a result, several practices were put in place across Assateague Island. First, a fence was erected at the Maryland-Virginia border, effectively separating the ponies into two herds (VA and MD). This accomplished two goals: 1) spreading out the impact of the ponies on the natural vegetation, and 2) limiting the impact of contagious disease on the horse population as a whole.
.
Second, the Pony Swim, Penning, and Auction has been allowed to continue. While some animal rights activists are strongly opposed to this tradition because of the obvious stress to the ponies, the ponies have no natural predators on the Island, and allowing them to naturally reproduce will not only expose them to a higher risk of disease and starvation, but will have a huge negative impact on the habitats used by the Island's native wildlife - from turtles to ducks to woodcocks.
.
Third, the government agencies who own portions of Assateague Island are all engaged in an active program to vaccinate the horses from certain diseases, and even de-worm them seasonally to lower the stress on their digestive and immune systems.
So now you know - typical of the Mid-Atlantic, these beautiful animals are neither pests nor pets, are very attractive but pretty invasive, and are the best and worst attributes of the Federal Refuge, National Seashore, and State Park that span the Island. If you haven't seen them yourself, you should.
.