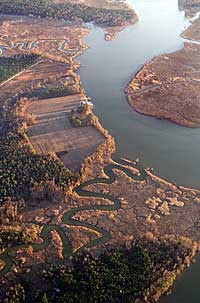 Time to head back to our "traditional" stomping grounds today - the Chickahominy River in southeastern Virginia. While I'm sure that the area's prior inhabitats, the Chickahominy Tribe, would take severe issue with that statement, perhaps in some small way they would be pleased to know that we are converging on the river as they did - to camp (primitively), fish, and participate in some fellowship with the other men in the tribe.
.
The River and its high banks are historic and actually legendary, providing sites for burial grounds for pre-Columbian native Americans, the Jamestown settlers, Revolutionary War dead, and Civil War dead. McClellan's Peninsula Campaign of 1862 (Union attempt to recapture Richmond, the Confederate Capital) failed when he realized upon reaching the Chickahominy, the river was at flood stage, and instead of a 300 foot water crossing, he would be faced with a 6 mile water crossing.
.
The River has undergone some recent changes - a dam built across the channel during WWII (to provide water supply to military installations and shipyards) has remained in place as a water supply source for the Tidewater, VA metro area. As a result, this well-flushed, freshwater tidal river has slowly turned into a brackish tidal river because the freshwater flushing has been highly limited by the dam, particularly during the summer months. The two main casualties: wild rice and the wintering ducks who feed on it. Where only largemouth bass were once found, now croaker, blue crabs, and striped bass can be caught in the summer.
.
It should be a great time and I'm not exactly hoping for a repeat of last year's outing (citation crappie but no bass caught from the boat), but I'll take what I can get. See y'all next week.
at April 23, 2009

damn dude I would take the crappie over nothing any day.Hopefully this year,with the bigger boat,we can go explore some "new" bass areas.

Good article. I haven't been down there in a while. Hope you have fun!

I love hearing about the history of a place. Sounds like the one to which you're going has some interesting history. Have fun!

excellent article, have a great time with your exploring
check out my Billy G Photography Blog. I will be doing a bit of exploring myself. all the best