Stern of an abandoned sailboat, floated into Folly Creek during Hurricane Hugo in 1989.

I decided to venture out into the marsh for one of the gems of the Carolina Low Country - Redfish or Red Drum. While it was very early in the season, I thought that I might have a chance at landing these fish, which are the bigger cousins of the Atlantic Croaker and smaller cousins of the trophy Black Drum. I have caught redfish before in Virginia while targeting flounder, but I had never targeted redfish themselves. In preparation for the trip, I read that redfish feed in the marsh shallows during changing tides, and like most inshore saltwater fish, are very inactive during cold weather. Their preferred foods are shrimp and baitfish.

Redfish enjoy regional popularity as a game fish and as food. Along the Atlantic Coast, the population is unstable due to consistently high fishing pressure. Commercial harvesting of redfish in Federal waters became illegal in 2007. 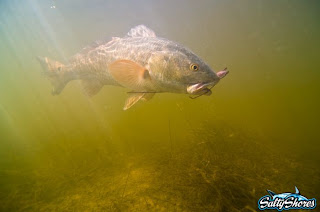 While croaker prefer structures in deep water, redfish (like this one) prefer chasing food in the murky shallows of the salt marsh. Picture hijacked from Salty Shores - a great fishing/photography website 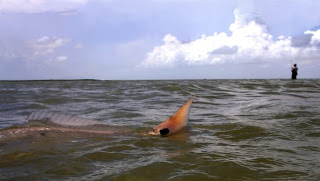 This is how shallow redfish get in their search for food
.
Ultimately, our kayak outting into Folly River and Folly Creek started to look like a "skunk" no matter what baits and lures we threw out there. We tried frozen shrimp, live minnows, redfish jigs (with spoon), sardine jigs without a spoon, all the "gimme" baits and lures. I had bought several topwater lures for the trip and did not even get them out of the tacklebox. At one point, we saw some small whiting breaking the surface, but they were not interested in any of our bait. Frustrating. Regardless, I learned a lot more about redfish angling techniques as well as kayak fishing in a marsh with a 6' tide! I lost one rig to the oysters........and boy, were there oysters. Healthiest oyster beds I have seen in years - Folly Creek, SC
This side of the creek is not open for recreational or commercial harvest.
.
The oysters on Folly Island are something else. They are in every marsh, and there are plenty of them. Even with harvesting and a lack of environmental protection (a la Northeastern United States), these beds look nothing like the beds of the Mid-Atlantic. The only difference I can think of is that most Mid-Atlantic oysters have been repeatedly whacked by invasive parasites MSX and Dermo, which kill about 50% of legal oysters annually in the Delaware Bay and Chesapeake Bay. Hopefully those nasty bugs never reach the Southeast.
.
Oysters provide more than food and filtering. Oysters provide good structure for fish and their prey throughout the marshes. In an environment where any hard structure is rapidly destroyed, oysters provide areas for entire ecosystems to evolve. I challenge you to find a photo of a living white-finger starfish. Better yet, you don't need to - here's one for you!
.
Paddling around in this healthy marsh was almost as much fun as fishing, especially after I lost my second rig to the oyster bed. I was really impressed to find a few living starfish in the intertidal zone, and even more impressed to see an amazingly high density of hermit crabs. It was really invigorating to spend time in such a high quality natural area that was so close to human activity. We managed to run out and get a bite to eat with a friend from high school, and then retreated back to the beach for the rest of the day. I don't think Roan really minded. Here he is, at sunset, on his 13th birthday. He has been retired for 2 years and he seems pretty happy about that.