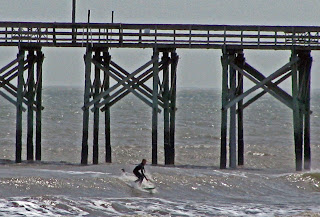 So there you have it - my first Outdoor Rec Round-Up. Hope you enjoyed it.

A Californian lifestyle in SC...who would of thunk it?

I'm originally from Southeastern NC, which isn't too different from the Low Country except the surf and offshore fishing are generally much better up the coast.

I despise golf too, but mostly because of what it's done to the hunting land where I grew up. I call it the Emerald Belt, that strip from southern VA all the way down the 95 corridor to Miami.

Anyway, now that I actually do live in CA, I've gotta say the only place here that reminds me of the Carolinas is down around San Diego. The rest of this state compared to the Low Country...? Like comparing Mars to Neptune.

Dang, I miss the Southeast.

Beaches, and coastal areas, are kinda hard to screw up, in my estimation. Even New Jersey has some beautiful beaches!

What makes the coast great to me is that the communities are often rooted in old history and culture, but new people are always coming in because of military transfers, other jobs, and colleges (things common to many coastal areas). It provides for a real spice of life that I think you really miss out on if you live inland on the east coast, especially in the southeast.