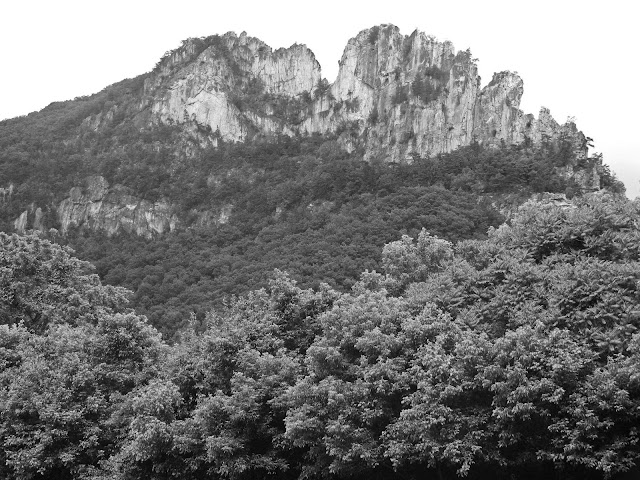 In the middle of racing between Grandma's funeral and trying to fit in a full week of work (on the road in West Virginia), we came by the famous Seneca Rocks formation in the Monongahela National Forest. The Rocks are part of a larger formation, the River Knobs, which are a tilted band of dense quartzite that runs across this part of the South Branch Potomac Headwaters (the parent material - sandstone - would have eroded centuries ago).
.
The site is an extremely popular destination for rock climbers, and has numerous pitches inbetween 5.1 and 5.8. I'm sure there are steeper climbs, but I could find reference to none on the internet. Native Americans camped along the River for centuries, but who first climbed the formation? According to my good pal Wikipedia, a highly publicized ascent in 1939 ended with the happy climbers finding the inscription, "D.B. 1908" in the rocks! One story is that the initials belong to a company surveyor, D. Bittenger, who worked in the area.
.
In 1943, the US Amy 10th Mountain Division (recently famous for their efforts in Tora Bora, Afghanistan), "assumed temporary control" of the site to train mountain infantry. Up until this point, most mountain infantry were trained in flatland sites, on man-made structure. Thousands of soldiers were trucked in for intensive 2-week courses on the Seneca Rocks. The instructors and students were unsure why these rocks were selected, or what type of assault they were training for. Their primary training site (Camp Carson, Colorado) featured extensive hiking and mountaineering but few or no multiple pitch climbs, multiple rappells, etc. So why? 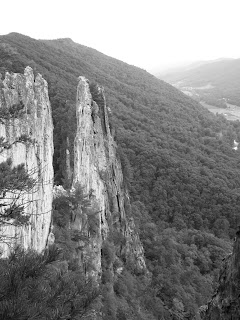 .The objective of this particular training exercise remained a mystery through D-Day (at which point the facility was closed), and until January 28, 1945, when the 10th Mountain Division assaulted Riva Ridge and Mount Belvedere in the Apennine Mountains of Italy. Three other Army divisions had captured the summit (the site of entrenched Axis heavy artillery), but all had failed to hold it. The German troops manned Riva Ridge lightly, because they believed it was impossible for any troops to scale the rock walls. The 10th MD troops scaled the 1,500 foot wall at roughly 1:00am, each carrying between 60lbs and 140lbs of gear, and captured Riva Ridge before dawn, leading to the fall of Mount Belvedere and the first significant retreat of the Nazis to the north. The technical climbing skills required of these men was gained at Seneca Rocks. 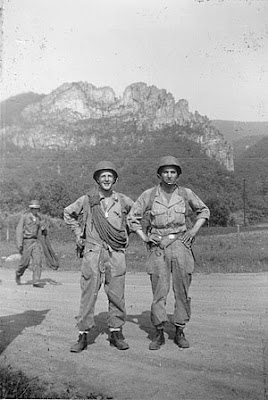 Good stuff to remember. I visited Riva Rdg and Mt Belvedere in 2006. The Italians in the Apennine hill towns put up (another) monument to the TMD, but this one was right smack on the summit of Belvedere, and huge - an obelisk type rock. Beautiful. I drank grappa w guys that were there, and yacked with the Italian Mtn Rescue guys, an Alpini general, and did meet one WW II Alpini vet.

The climb has been under rated (by the veterans) as a mere 4th class climb. Don't believe it. It is uniformly steep for much of the face, and exposed! In addition, they climbed at night, and in snow and icy rock conditions - some apparently with pac boots!

The Germans gave up a hell of a fight, too. They resisted even after capture, and one platoon in particular, fought off repeated counter-attacks from every direction. Lt Loose won the Silver Star for this action, which was a version of the Little Big Horn, and the Ia Drang Valley fight that was memorialized in We Were Soldiers Once.

The Italians honor the vets in the same manner as you hear that the Belgians honor the Americans. Very touching and sincere. They take a dim view of tyranny.

I continue to be amazed at the 10th Mountain Division. There is a back-country snow cat tour at Ski Cooper in Colorado that takes you to many 10th mountain historic sites. I have never gotten the chance to go...but I so want to. Thanks for the info.