You're Only Allowed to View the Water from a Safe Distance, and it's a $6 Fee 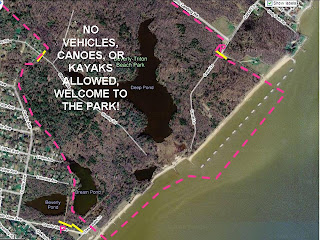 Beverly-Triton Beach Park - with access hours from 9am - 4pm by caretaker-issued daily permit only, and no vehicles, boats, kayaks, mountain bikes, or ATVs allowed....obviously a great expenditure of taxpayer dollars 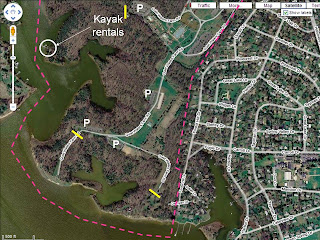 Quiet Waters Park in Annapolis, Maryland - looks like a great place to kayak & fish, no? Unfortunately, paddling is only allowed at the park if you rent their boats. A bargain at $40/day + $6 per car.
.
Alright, so it's The Intern's last day at work so I figured we would do a little ultralight kayak fishing before work. The previous evening, we settled on a great looking area in Anne Arundel County (an abandoned sand pit, now lake, at Beverly-Triton Beach Park). Note the word "Park." Luckily, The Intern also looked up the park web page, and noticed that it said,
.
"Access by Permit Only." Now.....wait a second. I've heard of access fees, and access hours, but if it's a COUNTY PARK, why, exactly would you need an access permit? And don't say, "well it's probably just for the community," because #1 there is no community there, and #2, if it's a county facility, it's run by the parks and rec department, which routinely utilize matching state and Federal funds for operations, facilities, and maintenance...making it (once again), a public facility. Here's a great (old) example of Federal matching funds for park improvement.
.
Just for fun, I called the Parks & Rec department to inquire about getting a permit. They referred me to the part-time caretaker, who I called. He told me ALL ABOUT the access that's available at Beverly-Triton Park (keep in mind, it's a giant forest, with a road running through it, a beach, and a big pond). Yeah, you see, there's NO BOATING ALLOWED. And NO VEHICLES ALLOWED (down the access road - guess you can hoof it from here!). And if you would like to go fishing, you can meet the caretaker between 9AM and 4PM for a "1 day permit." "Shoreline fishing only," the man says. Now, let's see. Meet the man at 9AM. Get my permit by 9:15, and walk the roadway...that means I might "possibly" have a fishing line in the water (again - shoreline fishing only) by 9:45 am? And then pack up and walk back down the 3 mile access road before 4pm when the caretaker locks the place up? Oh yeah, that's some QUALITY public park experience there! Fishing from 10AM to 3PM, from the shoreline. LOL. The taxpayers are getting a real deal on that one!
.
So, moving onward, we decided to paddle at the park pictured above, the favorite park of upper crust Annapolitans, Quiet Waters Park. The site is surrounded on 3 sides by shallow brackish water, including a small embayment that I believed might hold some nice fish. Kayak rentals at the park ($40 per day) are also advertised, so I presumed that adequate waterfront access existed (and again, look at that map above). Now, Quiet Waters Park does require a $6 per car donation, but with two of us in the truck, I figured, what the heck, why not (and yes, I'm choosing to "let go" the argument that $6 per car makes it a private park, not a public park).
.
So we're driving down through the park, scanning the signs for "boat ramp," "cartop launch," "canoe launch," or anything similar. We found absolutely nothing, and in addition, found out that the park "road" is closed off at least 300 yards from every single shoreline in the place. Then we figured, "Hey, we'll just use the kayak rental dock." We parked and then looked into the woods - easily a 500' trek on a gravel trail, just to the rental facility. We were beside ourselves - how can this park be surrounded by water, with NO water access?
.
We inspected the park map a little closer, and THEN came the kicker:
.
Boats may not dock on the park shoreline, overlook or at the boating concession dock.
.
Wow. So not only is it difficult to launch (anything but a rental boat) from the shoreline, but the County has actually made it illegal to launch or land from their shoreline - except at the rental dock - which can't be used by a non-rental boat. At some point you have to wonder - are they trying to keep the public safe by prohibiting us from using our own kayaks and canoes? Or are they just trying to supplement their vendor's boat rental business?
.
So I have to wonder - is the Anne Arundel County Parks Dept basically just a shell for developers to offload unprofitable land? The County can then call it a park, without providing any kind of reasonable access for the activities that people like to pursue. Why would you have a public park with a 30 acre lake, and allow no canoes? Why would you have a public park with 5+ miles of pristine shoreline, that can only be explored if one rents a kayak for $40 a day?
.
If anybody has an explanation to this....hit me!
.
I have no problems with taxpayer-funded land acquisition - heck, I fully support it, and I enjoy living in a state where our tax dollars fund so much land protection. But if YOU DON'T WANT PEOPLE TO ACCESS THE PUBLIC LAND, PLEASE DON'T CALL IT A PARK! Call it a preserve, a refuge, anything but a park. Parks are managed primarily to provide human access. Beverly-Triton Beach Park is managed to EXCLUDE human access, while Quiet Waters Park is...well...I can't make any sense out of having that much public waterfront and no access for kayakers (I mean, experienced kayakers who are less likely to drown than rental-boaters). So I don't know what their "management plan" is....certainly it's a doozie.
at July 10, 2009

I ran into somewhat of the same problem last month.As I was looking for a random lake to launch the boat in I found almost all county/city parks will not allow a personal boat/kayak.So yes you have to make your "donation" upon entering the park and then rent a city boat.On top of all that none that I found,I researched close to 20 in Virginia,will rent a boat before 9 am.It seems like a waste of time and it's very frustrating.

Well, is this SS GutRunner a city boat? It certainly has been on the open road enough to qualified as federally listed!

But yes, I think the name 'PARK' should be dropped if a family can't show up for free and have a picnic; then it's not a park.

I think you should send a nicely worded letter to the Anne Arundel County Council about this, and request a reply. Follow up by showing up at an open microphone session of the council, possibly accompanied by fellow kayakers in a show of support for water access from a so-called park.