The island at Dead Mans Cove, Loch Raven Reservoir. When the reservoir is fuller, this is a great bass spot - good structure and very deep water
.
Tug and I had a morning to kill while he was in town so we planned a little bass outting. Our last few trips there have not been super-productive so we thought we'd invite along Donnell from the Baltimore Planning Blog and see if the infusion of some beginners luck might help. Rented a bass boat with actual seats, right when the LRR fishing center opened at 6am. The first thing we noticed as we ducked into the first sheltered cove was that the grass beds have gone nuts! Most coves had a nice 6' - 8' wide channel open, but on the channel sides were 10-12' vertical walls of dense grass (submerged aquatic vegetation). Fish of every size, from bait to lunkers, could be seen in the weeds....visibility was about 6-8' - very unusual, especially given all the rain we've had this year. T Dizzle with one of the several small black crappie we landed.
.
The rain, once again, turned out to be our hex. No, the weather during our outing was perfect...but less than 72 hours before, Baltimore (and more importantly, points upstream toward the PA border) had been socked by a 3.5" rain storm. We got the feeling immediately that even though the water was clear, the fish were all very well fed. We threw - literally - everything at them. Eventually we found a good tactic (intermittent retrieve, 4-8' depth, parallel to edge of grass bed) and started catching fish. I can't remember many of them, but I'm sure that none were over 8" or 0.5lb. We caught no bass, several sunfish hybrids, black crappie, and I seem to recall that we landed a gizzard shad - who seem to be schooling and taking up large areas of habitat. Wonder if that will turn out to be a trend? I know that some lakes in northern Virginia are beginning to get overrun with the oily, foul-tasting gizzard shad. Donnell tries to de-foul a crappie bug lure.
.
It turned out to be a very slow morning for fishing but conditions were beautiful and the ever present motto, "at least we're not at work" was thrown around pretty frequently. By about 9:45am, the sun was up sufficiently to convince us that no big fish would be caught that day. Sunrise on Loch Raven Reservoir, northern Baltimore
.
Well, it's been over 3 months since I had a good fishing day, and well over a month since I have wetted a line. My new job lined me up with a long day of local meetings that somehow didn't start until 10am, and I decided to hit Loch Raven Reservoir, one of "the Northeast's best spots for trophy bass." As I've written before, Loch Raven is only 15 minutes from home, and offers a huge diversity of habitats, species, and fishing options, so it ain't such a bad place. I had read on the Maryland DNR fishing report that bass were holding very deep under grass beds, so I figured I might be SOL from the shoreline. I've had every possible type of fishing day on Loch Raven. I've been totally skunked (although not in a few years), I've caught tons of great fish, and everything inbetween. A "typical" day is when I work really hard and catch a few quality fish. This was one of those days.
.
I fished several rocky cliffs between 2 - 8' deep with a variety of lures. The small sunfish were happy to oblige me, but that got old quickly...and the sun was starting to rise. I upgraded to my two new favorite lures - the Rapala X-Rap Subwalk Glass Ghost, and the Yozuri Pin Minnow. Both rest near the surface, both have the lateral action of a traditional stickbait, and both will dive...to a limited extent.
.
I got a few MONSTROUS hits on the surface from larger fish (none larger than 2lbs), and several hookups with "keeper" bluegills on the Pin Minnow (all the fish were released). I started getting some action along a cliff, under a tree branch about 40 yards out, and kept working the spot until I landed this feller: It may not look that big, but this was a pretty substantial bluegill! 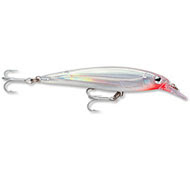 Rapala X-Rap Glass Ghost (not the subwalk variety I use) One of the morning's more bizarre problems occurred when I was fishing a small stony beach in a spring-fed cove. Every time I landed a fish, removed the hook, and tossed it back in, this juvenile brown water snake would pop out of his hiding place, and try to strike the fleeing fish!
I tried (with my foot - how smart is that?) to get him to relocate, but he wouldn't, and ultimately I had to change fishing spots, rather than risk being bitten, or having a released fish get chomped by this little 24" snake. The scenery was great all morning, and the long walk back through the woods was full of birds. I think this guy is a brown creeper, although he could also have been a wren. Great mental health morning, and the hookup with that nice bluegill has helped me re-set my sights on catching high quality fish when I'm on freshwater. Ginger beer - first batch
.
Again, due to the baby preparations and the new job, outdoor rec opportunities have been...nada. But I've tried to experiment with a few things around the house. One is ginger beer - one of our favorite (non-alcoholic) things to drink. I found Jeffrey Morgenthaler's recipe on his blog and used it....decent results. This ginger beer is actually "beer" - it contains champagne yeast and is fermented for 2 days before the fermentation is put on ice. It smells alcoholic and I read somewhere (maybe Jeffrey's blog??) that the beverage has about 0.5% alcoholic content. Since I don't have a juicer, I was unable to use real, fresh ginger juice, so I just used standard ginger powder, soaked it in water and lime juice, and tried to figure out the equivalency. It worked OK, but between the powder residue and the dead yeast, there are a lot of "fines" in each 40oz bottle, as you can see in the picture above. Smaller bottles are advisable but are more expensive. Jeffrey's blog recommended the EZ-cap bottles and I agree...especially if you get the cheap 40oz bottles like I did.
.
So how is the taste? The ginger beer is hot, and the heat grows as you continue to drink it. This is the effect I was going for. However (perhaps because I used ginger powder), the taste is a little bit "hollow." The drink is quite dry and crisp, which is good. I successfully filled out the taste by adding a little bit of vanilla extract. Next time, I will use powder again, but I will be using fresher, organic, Chinese ginger. Logic would have you using Jamaican ginger (since this is such a reknowned Jamaican beverage), but from everything I've read, the Chinese ginger is more robust and offers a complex taste (with the same or greater heat). We'll see how that batch works, and then maybe upgrade to "ginger juice." Cinammon-Grilled peaches
.
At my wife's request, I skinned some very ripe peaches, sliced them, and....grilled them. This is taken straight from the pages of my main man Bobby Flay, who while being a little annoying, is capable of grilling a spare tire and making it delicious. Here's his recipe for the peaches. I just threw the stuff together in a "foil basket" for over the Weber, and it worked! Obviously, unlike Bobby Flay, I did not use whole cinnamon sticks. They turned out perfectly - brown sugar reduces beautifully over red coals. I'm telling you, this was easy and it was delicious. Unless you burn them, or overdo it on the secondary spices (I used nutmeg, Bobby suggests mint), you can't go wrong! The Old Boy goes for a swim
.
At least somebody's getting out on the water...our 13 year old Chessie/Lab mix.