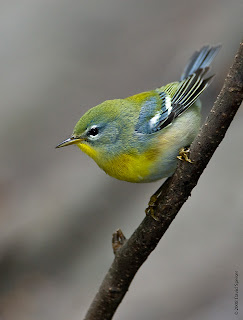 Proper photo of a living Northern Parula in Central Park (NYC) by photographer David Speiser. Please visit his wonderful site.
.
So thanks to Swamp4Me and her trusty companion Treebeard, I think I have a valid identification of my mystery dead bird - the Northern Parula. Which is a warbler, and not a flycatcher at all.
.
So what is this little guy all about, and how did he end up in my yard? Well, the Baltimore Bird List shows that the Northern Parula is a common spring and fall migrant in central Maryland, and uncommon or unknown the rest of the year. USGS reports that it's a small bird "even for a warbler" and (my interpretation) that its feeding habits are very similar to those of the Yellow-bellied Flycatcher - perhaps a case of convergent evolution, as both are very active, insectivorous birds around 4" in length, whose preferred summer habitat is wet coniferous woods and other Canadian wetland habitats. Unlike the Flycatcher, the Parula becomes widespread during its migration, instead of sticking to a specific route north or south. In this way, I guess you could say it's like many of the northern grassland birds, which suddenly become common in the Mid-Atlantic states in September, leave us in October, and return between late February and mid-April, only to leave again by early May. Also unlike the Yellow-bellied Flycatcher, the Parula winters from Florida and the Carribean to northern Central America, while the Flycatcher flies much farther south.
.
So what was he doing in my yard? Probably chasing the thousands of flies, mosquitos, and spiders that live amongst the vines, shrubs, and trees. Hopefully several more will stop by this fall, and not suffer the same fate!
.
So there you have it....Northern Parula.
at September 20, 2009