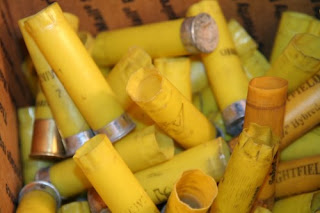 I have never done this before, so bear with me. Also keep in mind that I have not received any kind of discount or promotion for listing anybody's products here. Like most people, my gear selection are driving by the moving target of quality vs. price; and so much of what I have to discuss lies in "the middle of the road" in both categories. I think you'll enjoy my list, and feel free to chime in with your favorite gear - especially for the types of gear where I have yet to find satisfaction (at the bottom of the list).
.
KEEPING WARM: As I get older, and slower, keeping warm and dry are at the top of my list for keeping safe and comfortable in and around the water. Between work, surfing, kayaking, hunting, and fishing, I spend easily 75 days per year on, in, or around the water. This is where I spend the most money (per item) on gear, so there's a lot I've experienced. Here we go.
HUNTING: This is a shorter section, since (thank God) I have gotten to the point where I have what I need and I know what I don't need....sort of.

FISHING: I've been doing more freshwater and less saltwater fishing over the last few years, and here are a few thoughts:

First off the waterfowl glove thing is a joke,I just use the red head fingerless gloves for warmth.They work and are cheap but don't get them wet,so yeah it's a joke.The bibs or cover all thing is tricky to.If you need to be mobile stay away from the walls brand because they are stiff as hell.If you need to stay warm though,for the price,walls is where it's at.Lastly I think you are in love with your Wally Marshall spinning rod,you have been talking about that thing for a year.Good post!

The gloves are tough. I end up using decoy gloves in the boat and to set up, and then the glove/mitts to keep warm...and then I end up getting them wet and cold. Columbia ($49) and Orvis ($36) make gloves that *might* be passable so I will probably try the Orvis.

On bibs - The F&S ones are great - perfect actually. The Walls bibs are straight up rubber, for hunting in the rain when it's warm. Man, they get hot FAST. The Cabela's bibs I bought in August & haven't worn yet.