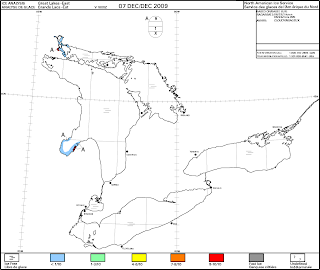 This week's ice cover map of the eastern Great Lakes. One bay's shoreline is 1 - 10% frozen. A lot of open habitat remaining for waterfowl! 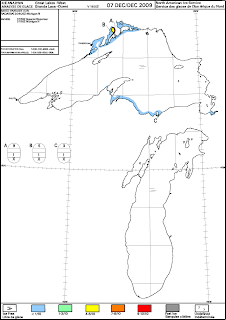 The corresponding western GL ice cover map for this week. Not much more promising. If you're still not convinced that regional air system patterns affect the migration, take a look at this picture of me taken on or about January 17, 2009: 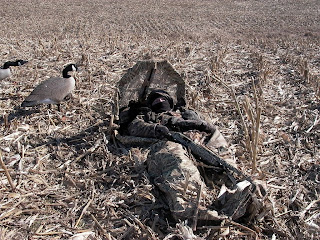 Yeah, it was 12 degrees F that day. Freaking cold to be laying on your back in a cut corn field.

I posted at the time that some folks were reporting our first big flights of ducks from upstate NY and a staging area in Southeastern PA between the Susquehanna and Delaware Rivers. Ducks were coming south right as the frigid winter weather was starting to freeze up our marshes. Here's the corresponding Great Lakes ice map from that week:

That's a LOT of ice. I have to thank the French Road Connections blog for grabbing and posting that image. Just 2 weeks before, around January 6, we were sweating in Virginia, trying to chase divers in 55 degree, sunny weather. The ducks were there by the thousands - but they were well-fed and not motivated to keep feeding.
.
As I've discussed before, there are many more factors involved in predicting the duck migration. The Atlantic Flyway migration is made up of over a dozen species of waterfowl who have different nutritional needs, feeding habits, and survival strategies. And news came from the USFWS early this summer that late snow and ice on the nesting grounds severely limited the hatch of Canada Geese....so another factor emerges. However, the fact remains that most of the ducks that winter in the Mid-Atlantic and the coastal Southeast come from the Great Lakes and the eastern Canadian provinces, and these animals are driven by a need to expend the minimal amount of energy while consuming the maximum amount of calories. That means that birds will stay local as long as they can.
.
Two great (related) examples of this from last season were the late December staging of ducks in southeastern Pennsylvania, and the mid-January migratory bypass of Maryland and northern Virginia by those same birds. Several flights (perhaps 100,000 ducks or so) settled into eastern Pennsylvania at the end of December, due to cold weather in Canada, New York, and the Great Lakes. Those ducks flew an average of (let's say) 1,000 miles in 4 days. They then stayed put in Pennsylvania until around January 10th - 15th, when that thick, deep, freeze forced them quickly (2 or 3 day flight) through Pennsylvania, Maryland, and Virginia (where most ponds, creeks, and marshes were frozen) into the more southern (and unfrozen) Great Dismal Swamp area on the NC/VA border and the shallow Sounds of North Carolina. A post from Tugboatdude along the Great Dismal Swamp confirmed it, unfortunately!
.
The word in our neck of the woods - even from global warming skeptics, is that "Maryland duck hunting is in the past." For the past 10 years, hunters in Maryland and Virginia have had stable but low harvests of ducks due (in my opinion) to longer-lasting warm conditions in the north, followed by a quick onset of brutal winter weather right at the end of waterfowl season, forcing birds quickly through our area (and back out of our area) in a 2 or 3 day period, or at most a 14 day period.
.
In the end, I feel like I've done all I can to adapt to this reality. While I strongly prefer hunting in the marsh, the majority of my hunting is now in fields, for geese, because those hunts are far more productive. I harvested one (ONE) duck in the 2008-2009 season, and with the 2009-2010 season 40% over, have harvested none. I'm proud that one of my first blog posts (October, 2007) referenced low numbers of local ducks "due to mild weather," and that my 2008 "Wish List" included a goal of only "going where the ducks are - whether that's north or south." So it's not like a new revelation (to me, anyway). Without making a trip out of the flyway (Arkansas and Saskatchewan come to mind) or trying to get a standing invite or membership at a farm that has flooded corn (aka duck crack), I don't know what else to do to improve my duck harvest.

Howdy Kirk- This is an enlightening post. Have you read James Michener's Chesapeake? From reading that novel, I have in my head that your area is an absolute duck magnet, but obviously, things have changed. I'll try to see what I can do about freezing up our Lakes a little earlier. I know the ice fisherman would appreciate it too.