Learning to be a Parent 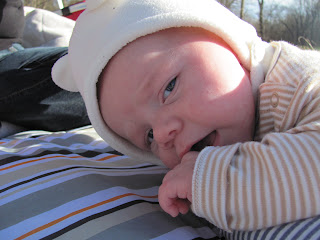 At age 11 weeks, Hank is all about....Hank.
This is a basic guide (so far) for those of you who haven't had the joy - and it is a joy - of trying out parenting. Also, you older guys will laugh at me. And that's fine. Glad you're here.

How's it been so far? It's hard to describe. Hank is a REALLY happy baby so that has been a huge help. But still, the worst of it is the lack of sleep. The amount of sleep I get rivals my most intense weeks of graduate school. Meaning that I sleep in my car, office, couch, basement...really anywhere and any time I can. Up until Hank was about 8 weeks old, I was getting 4.5 to 5.5 hours of sleep per night. A month later, it's 5.0 to 6.5. Which would rival "normal," if it were not also hunting season. Still, we are making it work. And those hours of sleep - that's not all at one time. I often take a nap from about 930pm to 1030pm, get some sleep between 1am and 3am, and usually from about 4am to 7am. And sometimes, not that much.

The feeding (at birth, every 2 hours; now, every 4 hours and sometimes longer at night) has been pretty intense but it's just one of those things where you do the best that you can. You ask, "intense? how?" Let's put it this way. A baby goes from "konked out asleep" to "starving hungry, flailing, and screaming bloody murder" in about 40 seconds. It takes about 8 minutes to heat up a bottle. You do the math. 40 seconds warning at 4am...that's what I'm saying.

The good stuff is better than you can imagine. I am not sure if Hank recognizes me, personally, or if he just smiles that big for everybody, and is playing us all for suckers. His smile makes me want to give him anything he wants. I would get it for him. Luckily he cannot talk. The sounds he does make (other than the Hunger Scream) can make your heart melt. He is growing quickly and it's hard to explain my inner conflict between loving how he is right now, and being eager for him to grow to the next level.

One thing that continues to be really tough is making myself do things that are indirectly good for Hank. Like staying in shape and not eating every meal like it's 11:55pm on Death Row, and I'm up next for Old Sparky. And trying to schedule some outtings & hunts (not at the pre-baby regularity) to keep my head straight and feel like a real person who continues to have an actual life. It's so easy for me to just sit on the couch and just watch the baby all day. You feel like you're supposed to be there, but at some point (especially if you have a partner), I know that kids need to know & recognize that while they are the most important part of your life, they are not the only part of your life. I think this would be much harder if I was a single dad, or if I really enjoyed going out to bars. Luckily, I just want to sit out in the saltwater and tell tall tales.

Being a parent has been the single biggest science experiment of my life, and yet I feel like the best advice I get is from coworkers and outdoor buddies who have had kids - not the American Pediatric Association or the AMA or anybody else. As a scientist, that's hard to reconcile.

For all the sore knees, dirty diapers, sleepless nights, and baby bottles, being a parent is already one of the funnest things I have ever done. Hank doesn't comprehend much, and his only understanding of the outdoors is based on his mixed feelings about the giant bright light in the sky, and his very serious fascination with staring at the winter treeline against the sky - the contrast of the branches, I guess. I am looking forward to getting on the water with him next summer, and for many summers after that. You'll be reading about it here - you can count on that much.
at December 14, 2009

Congratulations...enjoy every minute of it..even the testy ones. They make you appreciate all the others...and as a hunter..you never minded getting up in the middle of the night to get out to the good spots etc..go with the flow...it'sll get better...the next big step is the "terrible twos"..something to look forward to.

Thanks for stopping by! Being a parent has been great, but exhausting, so far!

I must say that my sleeping habits didn't change all that much with Weston. Megan pretty much was the one who got up to take care of him through the night. Kudos to her.

Also- I know about what you're talking about when you say its easy to just sit around on the couch all day and do nothing. Especially with winter setting in, I just find it perfectly OK to do nothing but be with my family.

I need to get out a little bit more and do some things this winter.

Anyways, fatherhood is great. Weston is to the point where he regularly calls us mama and dada. It's great.