"Alone in the Wild" - TV Worth Watching 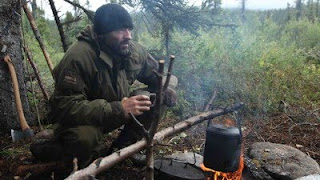 Scottish outdoorsman Ed Wardle films himself on "Alone in the Wild"
.
I will admit, I am a sucker for real (not "reality") wilderness survival shows, namely Survivorman and Man vs. Wild. And I admit it, I prefer the slicker, slightly less authentic Man vs. Wild. Both shows, if you're not familiar, feature a survival expert trying to survive in various wilderness locales for anywhere from 3 to I guess 7 days. Which is plenty long, when you start with no food, water, gun, or lighter/matches.
.
So, the other night, I was fascinated by a 1-hour summary of "Alone in the Wild" on the National Geographic Channel. "AITW" is the story of Scotsman Ed Wardle's planning and execution of a summer solo trip to the north Yukon Peninsula, where he intended to survive, alone, for 90 days. The show makes an important point in stating that Wardle, an "extreme adventurer" and life-long hunter and trapper, is "a skilled outdoorsman, but not a survival expert." This got my attention. "Hey," I thought, "I guess that's kind of like me." Between my biological training and my outdoor interests, I'd like to think I'm "skilled." Yes, Wardle has summited Mt. Everest....twice. But still, if you spend the time afield that I do, you would like to think that you could actually survive out there if you had to, right? I would. Until I saw this show.
.
Like Survivorman, "AITW" is filmed by Wardle alone, not like Bear Grylls and his film crew of awesomeness (which again, admittedly, makes for better cinematography and better TV). It's this fact that makes Survivorman a "little more authentic and gritty"; and it's this fact, combined with Ed's 90-day survival goal, that make "AITW" impossible to stop watching. 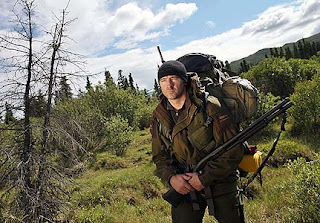 Wardle starts his journey just like the other guys - he's dropped in a remote location (albeit, with more tools, including a kettle, an axe, a fishing rod, a sleeping bag, a tarp, and an extended mag shotgun). If you're like me, you're thinking, "Man, I could easily survive with THAT gear!" Keep reading. The first thing to note is that this is the Yukon in July. That means that both Grizzly and Black Bears are on their way down from the mountains, trying to intercept the salmon spawn. Wardle spends an enormous amount of physical, mental, and emotional energy trying to stay aware of the threat of bear attack 24 hours a day. The second notable fact is that (from what I gather), Wardle was told by the provincial government that he could not kill big game or waterfowl out of season. The third notable fact is that Wardle's journey is set to take 90 days...not 3, not 5, not 7. 90 days. Alone. None of those three things are insignificant.
.
Like the other shows, Wardle films himself having varying degrees of success hunting, trapping, fishing, and gathering (plant) food. By itself, those things are the standard fare for these survival shows. What's gripping is his pursuit of food, given the three notes above - bear attack, alone for 90 days, can't kill moose, deer, ducks. As the viewer quickly sees, it's hard to actually accumulate enough calories every day to live on. When the "short term guys" are doing it, you can certainly survive on roots and berries and bugs for 3, 5, or 7 days. Around that time, the human body starts to tear itself apart to survive. Somehow, I forgot about that. "Survival" is cool and all, until you have to start thinking about kidney failure, etc. Wardle begins to lose weight and muscle after just a few days in the wilderness.
.
What I'll remember about this show (second to just one thing, which is next) is that despite the hours and hours of fishing and catching and cooking, once Wardle's body starts weakening, he's not able to keep pursuing food that many hours per day. So he continues to get progressively weaker, because he's picking/killing fewer and fewer calories of food per day.
.
What will stay with me for the longest is the video documentation of Wardle's mental and emotional breakdown. He hangs in there with pretty good spirits for about 25 days, and then he starts to hit some road bumps. At 40 days, the viewer is treated to maniacal screams, insane rambling about how people "aren't meant to live alone like this," and how Wardle wishes he could just see or touch another person. Wardle's hair is falling out, and while he started his adventure in great physical condition, he has probably lost 50 pounds at this point.
.
At 50 days, the filming shows Wardle in a near-lunatic stumble through the woods, and he makes the decision to activate his Spot GPS and have the rescue seaplane come in from 250 miles away and extract him that day. He looks and acts humbled by the experience. At this point, anyone watching it who has real outdoor experience would be struck by the realization that the difficulty of all this survival stuff isn't just the conquest for food and shelter - which are challenging enough, but the human need for companionship. I have to admit, when I have considered the usual variety of post-apocolyptic scenarios that might require me to employ my outdoors and survival skills.........it never occurred that the hardest part would be doing it alone.
.
.
.
Ed Wardle's summary of the trip can be found over here.

If you liked that ( I found myself not liking Ed Wardle) Then you will probably love "Alone In the wilderness" which is about Ed Proeneke who went it alone in Alaska. You can read my review at http://envirocapitalist.blogspot.com/2009/03/movie-reviews-alone-in-wilderness.html Check it out you would love it.

Thanks for the heads up, I checked it out and enjoyed it...

Gabe - I will definitely check that out. After a little more thought (and some online viewing of Wardle), I think I understand a little more why folks are so disgruntled with him. What to me (and Wardle) was partially a psychology experiment, I think to many other viewers was "a bunch of whining."

I guess I fail to see what other options the guy had than to sit around and whine...on the other hand, that doesn't mean we all have to tune in and watch it.

Thanks for stopping by DEDH!