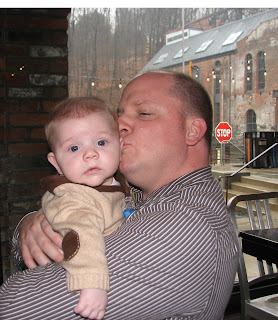 Slight change in priorities this duck season...Hank and I on a saturday morning, under clouds, rain, and sub-freezing temperatures, in duck season...couldn't be happier!
.
The new week begins with some anticipation of some good hunts. Both of my brothers are coming up this week to take part in a series of hunts I've set up - 4 hunts in 3 days, to be precise, and I think everybody's excited. The preparation will be a little complicated, but of course, I started to prepare about 10 days ago. The weather in the Mid-Atlantic has gone through some crazy cycles so far this winter, and in the end, it seems to have settled on "normal." Most nights are below freezing and most days are in the mid to upper 30's (F). That means that food is generally available to waterfowl, and while more migratory birds might not come to our area in the last two weeks of the season, we should still be able to hold the light/moderate numbers of ducks and moderate/slightly heavy numbers of geese who have hung in there through the cold snap.
.
Before the season, I knew that my hunting would be less than in previous years. We normally have a 50 or 60 day waterfowl season, and in the past 3 years I've probably been out 20-25 days per season. I was hoping for 10-12 this year. It turned out to be even less than I predicted, with Henry in the mix. We have two weeks left, so I should hit 10...barely. Interestingly, it hasn't bothered me at all, except on maybe one or two snowy, windy days when I know my buddies are having a great time out on the marsh, and I'm babysitting (just being honest). It hasn't bothered me for a couple of interesting reasons. First, I am exhausted. And I stay exhausted. Henry is growing quickly, which sometimes means a solid night of sleep. And sometimes means a solid night of thrashing, tossing, turning, eating, pooping, and crying. After one of those nights, I would gladly pass up a hunt Or five hunts. I take sleep anywhere I can get it.
.
Second, my calculated gamble of paying for my sanity actually worked. I paid for a membership at a remote and low-key hunting/fishing club on Maryland's eastern shore, and for the money, I got my mid-duck season sanity back (instead of worrying about getting to the public spot first, waiting at boat ramps, is the game warden coming?, etc). I know that I can go hunting on my schedule, especially on weekdays when most of the club's distant members are unlikely to be hunting.
.
Third, even when Henry is at his most crazy level, I'm happy to hang out with him if it helps the Wifey. After 10 years of marriage, I am pretty confident that every day spent changing diapers is another future day stalking turkeys, riding waves, chasing fish, or calling ducks. It all has seemed to work out over the years, and I am happy to do my part. I find myself thinking back to scenes from an April, 2008 turkey hunt, a January, 2008 duck hunt, and an April, 2009 surfing day.
.
And I have to admit, sometimes I do sit there and imagine the next warm day of surfing, the first day of turkey season, or the last day of goose season. All things in moderation...more days afield are coming! And in the long term, it's nice to think that I won't have to choose between time spent with Hank, and time spent in the salt water.
at January 18, 2010

Little ones don't stay little long so enjoy him! And one minor correction - fathers don't "babysit", they parent ;)
Hope you have a great time with your brothers and a successful hunt.

I am loving it! And while you make a good point about the difference between "fathering" and "babysitting," (good point and it made me laugh), I'm not sure that we are at the point yet where the two are so very different. I hold him, read him books, play the guitar for him, feed him, change his diaper, and try to make sure he's comfortable. At 4 months old, there's not much meaningful fathering I can do beyond those things!

You're right though, soon enough there will be a big difference.