On 15 Years as a Wetland Technician & Biologist: Part 1 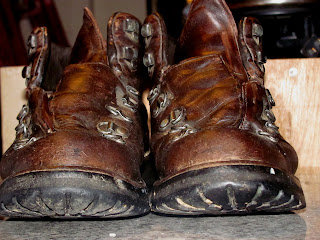 My Danner Mountain Light IIs - freshly waxed and currently awaiting a new pair of laces (at least the fifth or sixth set). They've easily walked over a thousand miles in a dozen+ states in the 10 years since I bought them.
.
It's been quite a ride since my first gig as an environmental technician for the USAF in 1994. Since then I've paid tuition to at least four universities, finished three degrees, quit on a fourth, lived in three states, and worked in at least sixteen more states. So let's go back a ways.
.
I always wanted to be a scientist. I literally took every science class that was offered at my high school. My senior year of high school had me applying for programs as disparate as William & Mary Geology; Virginia Tech Biology, and U of Delaware Agriculture. I just wanted to get muddy and learn stuff about things that lived in the mud and salt water. I am forever a little boy in that regard. I ultimately chose Virginia Tech, and to make a long story short, I learned that most Biology majors are just pre-med majors have no intention of going to Med School, or finishing a biology degree, for that matter. I really was not in tune with (read: not smart enough to excel in) all of the human anatomy and toxicology coursework, and (to my parents' initial dismay), I transferred to the Virginia Tech College of Forestry and Wildlife (now, the College of Natural Resources).
.
The change of focus I encountered - from laboratory research in the biology department, to field and GIS research in the Wildlife Department, would solidify my path as a biologist concerned with on-the-ground applications to theory and policy. At the time (1994), amphibian studies (herpetology) were starting to emerge as an important sub-field of wildlife conservation. I studied quite a bit about amphibians, which meant that I had to learn a lot about their habitat....wetlands. Thank God for that. At this point, my career goal was to become the manager of a National Forest or National Wildlife Refuge. I thought "that's what everybody does." I certainly didn't envision having to deal with travel, budgets, and politics. I was going to be a scientist!
.
One of the first "real lessons" that I learned about land management was that land management goals are never ideal - there are always competing uses and self-interest (namely politics, money and laws) to deal with...and how did I learn this?
.
In 1994, the focus of habitat management work at Va Tech was largely dictated by the "multiple use doctrine." Basically - we can't manage wildlife for just wildlife's sake. For instance, an average project wasn't just "how can we best manage the land for the black-bellied salamander," but "how can we best manage the land for the black-bellied salamander, while still managing the property for timber harvests." I later figured out that this was because the Department's primary benefactor was Georgia Pacific, possibly the largest timber broker in the eastern United States. In fact, Va Tech and GP actually shared a president. I love the South!
.
And so, I was off. As a newly christened "wildlife science major," job opportunities (the unpaid and low-paying variety) opened up quickly. I worked as a technician for the USAF in 1994, a park ranger for the state of VA in 1995, and a consultant technician in 1996 and 1997, and I finally received my BS in Wildlife Science and my BA in Geography in Remote Sensing. I had learned a lot of great theory in school, and sadly, one of the other key lessons I learned is that theory is rarely properly applied to practice; however, many poor practices are explicitly carried out in the name of the science that spawned them.
.
My last gig as a consultant technician was at an Army base in Virginia. Talk about "multiple use!" Any habitat work we planned had to be able to withstand artillery practice and being caught on fire from machine gun practice! I'm totally serious. It was a fun gig - I lived & worked on base. We did a lot of fun stuff, I learned a lot, and I learned some important lessons, especially when my buddy quit because he "got an awesome job as a state biologist, camping in the brush and doing quail surveys...it pays $8.00 an hour!" That settled it - I was going to go to grad school - somewhere, somehow. My other key lessons from that period:

1. No job requiring a college education is so "awesome" that you should get paid $7.25/hour for doing it.

2. The most successful land managers are those who can communicate their goals to those in power, in a way that makes people comfortable. Whether they are great ecologists is a secondary consideration.

3. The happiest professionals are those who have breathing room to make mistakes, take responsibility, and try again without fear of automatically being fired

4. Success has a thousand fathers, and failure has...well, you know the rest. 15 years into my career, this one still surprises me occasionally. I'll discuss this in one of my next posts (Part 2).
.
In the fall of 1997, I was offered an assistantship (but no tuition waiver) to the Geography Department at Appalachian State University in Boone, North Carolina, studying satellite imagery applications to forestry and wildlife management. I guess it didn't dawn on me that $12.75/hour x 20 hours/week did not add up to a lot of money, but I rented a mountainside basement apartment and moved my stuff from VA to NC one hot weekend.
.
I really enjoyed my time at Boone (take a sec to check out the area's best photo blog - Blue Ridge Blog) - it was the first time I was truly surrounded by other people who were obsessed - almost possessed - with the outdoors. It was great! There was the guy who only drank bourbon and fly-fished. There was the guy who was training to be a professional ice climber, but he needed more GIS training to keep his regular job. There was the gal who just wanted to hike the Pisgah Wilderness Area and smoke a little reefer. We studied hard and spent all of our free time outdoors. That was one of the best things about being in graduate school - being surrounded by smart, like-minded people. Ironically, one of the worst things about being in graduate school is that everybody is SO FREAKING SMART. I mean, they will not hesitate to tell you just how smart they are. And if it's in public, in front of your friends or professors, well so much the better. In grad school, I learned that

2. if I produce results, people will notice. I don't have to advertise. This is the "up side" of working among very competitive people. They notice when you succeed, also.

3. Patience wins the day. Politically it is so important to be patient and "allow things to develop." More on this in Part 2, as well.
.
In May 1998, I took a job as a wetland technician for the Nature Conservancy at their Barrier Island Station on the eastern shore of Virginia. I didn't know that as I drove east on I-40, through Winston-Salem, Raleigh, and up to South Hill, VA, Suffolk, VA, and stumbled back into my "stomping grounds" of southeastern Virginia, that this job, that summer, and the months that followed, would change my entire life. To be 24 again! And to be continued.
at January 06, 2010

Just thought I'd post here in regards to the hybrid duck issue, and honestly can say that it isn't a problem here. We really don't have a great mallard population and many off those are enjoying the corn thrown out in particular areas. The black ducks are far more cautious and tend to be a tad more "intelligent" about where they go, there has been only one duck that I had to seriously look at in terms of hybrid features.

It's funny how we end up where we are today, every once in awhile I think about that day I changed my major from civil engineering to education... Then I think about my beauties, and thank god for the choice I made... Great post, look forward to the next phase...

awesome- getting this degree done is going to be sooooooooo awesome. I have fallen into a different puzzle location- my successes have given me the expectation to have everything ready perfectly asap for my classes and my jobs....