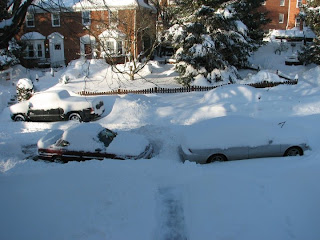 48 inches of snow in 5 days. Just awesome. That's my truck, across the street to the left, after the second storm dumped 20" on us. And Sadie's Honda, across the street under 4 feet of freakin' snow, because I didn't dig it out after the first 28" storm.
.
Now, you all know that I am an outdoors maniac. But nothing will take the wind out of my sails like the TeeVee Man throwing around words like, "State of Emergency," and "Citizens are Not Authorized to Drive on City Streets." That's right, Baltimore is up to 79.5" of snow (with locally higher amounts), making the "Gem of I-95" the Snowiest Place in the Lower 48. That's right, more than Denver (56"), Boston (22") or Buffalo, NY (60").
.
It's a lot of freaking snow and it's completely paralyzed our infrastructure. Whether you're in the city, suburbs, or country, it doesn't matter when you have 7 foot tall snow drifts that were not there the day before. I am ready for Spring. I just heard that I got a "City Farm" urban farm plot this year, so I'm looking forward to doing some more traditional gardening than I usually do in our shady, clay-laden yard. But I'm not doing anything until the snow melts.
.
Want to know who's got the worst cabin fever of all? The Hankinator. 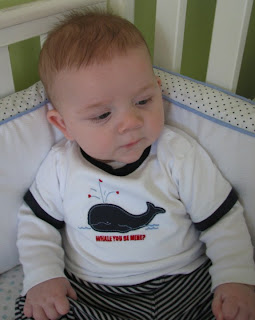 The Dude is not amused with the lack of stimulation or activities. Parents = Lame

And here we sit in Maine, bare ground and I think the grass is starting to grow...

I remember talking to you back in November and we both agreed the weather pattern was off this Fall.It continued on through the early Winter and only now looks like it may change in the next few weeks.So far this Winter it's been Nor' Easter after Nor'Easter.As the DEDH stated the New England states are below normal for snowfall so far.

I uncovered my coldframes yesterday, where my lettuce & radishes have been frozen in time for 2 months. It's been a typical el Nino winter. The last one I really enjoyed was 1998-the weather continued through the next summer and hurricane season...I'll never forget the epic fishing and surfing that year.