Have You Seen This Lure? (reward) 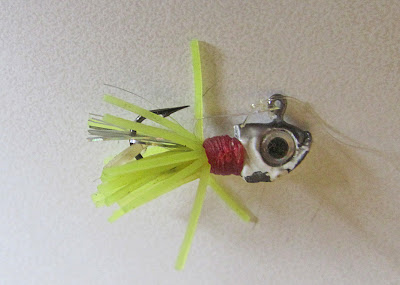 Show me where to buy this tiny mystery lure (that's about a size 10 hook), and I'll send you a $15 gift card to your favorite online gear retailer
.
UPDATE....we have a "near" winner...as Tugboatdude correctly (apparently) remembered the manufacturer of the lure as Blue Fox. The lure is the Blue Fox Big Crappie Jig , and the reason that we "thought" we had found it before, and were wrong, is that it's sold in tiny sizes for a "big crappie" jig....1/64 (winner!), 1/32, and 1/16. So the lure is a 1/64oz Blue Fox Big Crappie Jig.
Lures come and lures go. Some are laughably bad, like the YUM Dancin' Eel, and others are just as bad, but we buy them anyway, and find out the hard way...the Berkley Blade Dancer immediately comes to mind.
.
Then there are lures like the one above. About 5-6 years ago, a lot of my work involved urban streams and wetlands. Often, there would be an opportunity to target nice big pools of sunfish, bass, and crazy non-target fish, from goldfish to trophy-size (ha) suckers. I remember going to an urban Wal-Mart near Washington DC and they had the lure above, which was one of many tiny lures I bought for the task at hand. At barely over 1/4" long, it was a bear to tie it on with convential 6lb or even 4lb line. But man, did it ever catch fish. I bought the same lure again at other Wal-Marts - I bought pink, black, and white. Tug and I have been trying for 3 years to find these lures again, with no luck whatsoever.
.
At the time, I recalled it being a Gitzit product. However, a visit to the Gitzit site, and every gear store on the eastern seaboard, has revealed that Gitzit does not make this product. And I'm not confident that they ever made this product. The closest thing they manufacture is the "Micro Little Tough Guy" which is also on a size 10 hook or so, but is about twice as long as this lure, and also features a rubber body instead of a tied rubber skirt. The jig head looks the same, so there's that, but the trail goes cold after that.
.
Let me tell you about this lure. It's caught me some really fun fish. Like this one (scroll down), my first white catfish, at 13" or so. And this one, a near citation crappie on a day when nothing was biting. And a day when I caught about 40 panfish from 5? species in about 90 minutes...I think every single one of them, on this lure. No, it didn't catch any of these guys, which is why I haven't looked too hard for this lure......ultimately, it's a lure that produces a large number of sub-2lb fish in a very wide range of conditions, but ultimately, these are not trophy fish that would be more worthy of chasing a lure around like this. But since a lot of my fishing opportunities are based on "What county are we working in, today?" instead of, "What's the best day to go this week, based on the spawn and the barometer?", a lure like this is a very, very useful tool.
.
The mystery lure is composed of this jighead, 1/16oz at most, with the giant eye. Behind the eye, a rubber skirt is tied on. Attached to the hook is a tiny rattle, which never seemed to make much difference.
.
Let me know where I can get these, and when I place a successful order, I'll send you a small ($15) token of my appreciation. Please!
at March 27, 2010

Sorry I can't help you...I love lures...don't fish..but love lures. We spend a lot of time on the water getting bobbers and fishing line out of the trees. One of these days we'll have enough to start fishing with..LOL We saw an Anhinga flying with a 40ft piece of line on it..that was our inspiration..

I was taking a romantic stroll on the beach with a girl at age 17 or so, and happened upon a dead sea turtle covered in fishing line. Horrible.

Ever since that day, I pick it up everywhere I see it, even if it isn't mine. And if a lure's attached, finders keepers!

hey dude I think,maybe it's made by blue fox or uncle bucks.I have the box at home in one of my piles of crap,so when I get home in a few weeks I will check and see who makes it.I really think I checked it out online and couldn't find it either.Don't forget Gitzit gonna get you!

Did you ever find these? I look for them in every store we go to, hoping that maybe, just maybe I might be able to find some for you. (It's like a treasure hunt!)