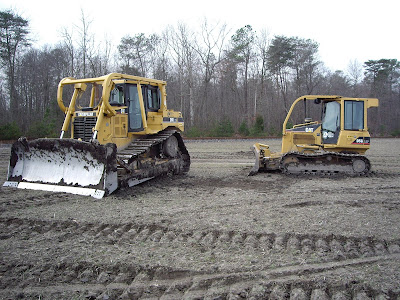 Equipment rests on a wetland restoration site after a day of pushing up small earthen berms
.
So, after 12 years of doing everything that someone can do in a wetland, and making a few folks rich by doing it, I decided to jump to the non-profit sector. Biologists who get into non-profit work have a few things in common that are not necessarily shared by our brothers and sisters who work in the corporate world or for government agencies, and it was an interesting process for me to acknowledge that I fit the bill, too. Non-profit employees typically:
.
*are driven by one main thing: to be able to see and feel the impact they have on the world.
*need to be "recharged" by working with other people who are driven & passionate about work.
*have no illusion that neither their job description or their job are stable (this is also true of many private sector folks).
*are happy to work overtime, nights, and weekends, for no pay whatsoever.
*can afford to live this lifestyle, and take these jobs with slightly lower pay
.
When you add those things together, I can say from experience that you come up with some very, very interesting, motivated, and intelligent people. And, unfortunately, at least 10% mentally/emotionally unstable people whose entire lives are defined by their work.
.
Working in the non-profit world, first as a field biologist and now as a program manager, has been an absolute blessing in my life. It's tested me, and challenged me in a lot of personal and professional ways. Instead of being in a horse race for money, the inter-employee competition surrounds dedication, "road hours," and "real things" accomplished. It's empowering, fun, and can absolutely obliterate everything else in your life, if you allow it to do so. Unlike government and private sector jobs, the nonprofit model really forces all employees into a certain level of "leadership" and "executive decision." I've never felt so alone professionally, as when I've been forced to say, "Yup. Let's do it. I am authorizing you to do it." Which is weekly, if not daily, in my work (and which I didn't see or experience as a consultant). The consequences of poor decisions at this level (where you are authorizing contractors and signing checks) usually involve a tarnished reputation.......and getting fired from your job.
.
I want to do another post soon about "how conservation non-profits work," because I think y'all will enjoy it mightily. Here are a few snippits:
.
*Non-profits walk a tight-rope between "achieving their vision" and acquiring the funding to do so. If someone overextends the organization's commitments to its mission, it means that people will lose their jobs. If they are underextended, then the group's mission is not getting accomplished effectively (and donors go elsewhere with their money). With money coming and going constantly, it's a very difficult balance.
.
*Quid pro quo between non-profits (employees and board members) and their donors is highly illegal....and frighteningly common. The Nature Conservancy was the last major group to get popped, although similar allegations have popped up in the last 2 years concerning NWTF and QU (substantiated? You be the judge).
.
*Less focus on efficiency like the private sector, or protocol and policy like the public sector; instead, a non-profit's overall focus is usually on constantly increasing the impact of the group's activities. This makes employee reviews pretty "interesting," let me tell you! Think about that for a minute - how differently an organization will work (on a daily basis) if the primary goal is "impact" instead of "efficiency" or "protocol/process/policy." Those are all very different things, and all could be used to drive a group focused on (for example): "advancing wetland conservation."
.
For me, it's been great to be associated with other biologists, engineers, fundraising people, and even policy wonks who are highly dedicated to getting stuff done. Not for money - just to get it done. It's also produced a whole list of new "truths" that I haven't figured out well enough to actually call them lessons yet, because I don't know what I'm supposed to learn from them. Check back in another year or two - maybe I will have figured these out by then!
Some general truths from the non-profit world:
.
*The Rules are not always "the rules." Something can often be "worked out" if you know who to ask, when to ask, and how to ask. If you don't ask, nothing will happen. That much I can promise.
.
*Regular non-profit staff are not always given the "full story" about things that are going on politically or financially. Much of this information is highly guarded at the upper management level.
.
*It seems that people in every level of a (medium to large) non-profit group have political talent. Many have political aspirations. All I know so far is that means that I have to keep my mouth shut, so my humorous anecdote doesn't get turned into someone's "give me a promotion, Swampy's an idiot" campaign.
.
Thanks for tuning in for this drawn-out series! I hope somebody reads this and sees "what it's really like." It's been a blast - never a dull moment - and there's no sign of it slowing down.
at March 26, 2010

Thanks so much for following my blog. My wife and I just moved back to NC from Baltimore this summer. She was in school at Johns Hopkins. We were only there for 2 years but we loved it. Still miss it a lot.Spent a lot of time on game lands up there. Love your blog. I was reading your post about the blue crabs. I only got to enjoy them a few times up there because they have gotten so expensive. I am just getting a feel for all of this, trying to improve my writing and the blog. How did you find NC OUTDOORSMAN ?

I just saw your comment. It is always great to meet another Mountaineer. Got to love those Tacomas, I might not ever own something different. If you want to get rid of some decoys, I dont care how bad off they are, I will gladly accept. Just shoot me a message whenever yall are headed to NC. Too bad we did not connect while I was in Baltimore. I would love to join a hunt club down here, just waiting to get a better job.There are lots of gamelands around me now, so it isnt too bad. I sure would not miss dealing with all of the knuckle heads though. Looking forward to keeping up with your blog.