Gardening with Bt - When does "Organic" become "Genetically Modified?" 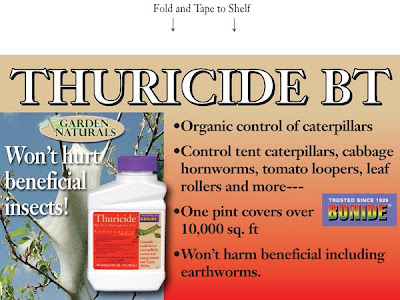 I'm sure Bonide won't mind the free advertising
.
Most of you who farm or garden now know about Bt - Bacillus thuringiensis. Bt is a bacterium applied as active spores to areas with active caterpillars (to kill them). Like E. coli in mammals, Bt is a naturally occuring bacteria in caterpillars that can be highly toxic if introduced improperly (namely, by feeding).
.
And in the face of Malathions, Atrazines, and many other conventional pesticides in which our produce is soaked every year, obviously this seems like a great option for small farms and gardens with an infestation of cutworms, loopers, and the like. You simply spray (or powder spread) the spores on and around your plants on a moist, cool day. They grow, reproduce, and look forward to getting back into the gut of a caterpillar. Again, no chemicals are involved. To me, this is an amazing development in pest control - 1) the species already occurs in nature, and 2) no extra chemicals are needed to activate or spread it. Bt is so safe for people that it can be applied up to the day of harvest! How cool is that?
.
Here's where it gets interesting. Scientists have figured out a way to splice the toxin from Bt into the genes of commercial crop plants. Corn and cotton come to mind. Did you see how I just did that - we were talking about an amazing, safe, organic pest control and now we're talking about genetically modified crops! Hooray! I'm going to sidestep the "GMo" debate entirely here and just talk about what that means.
.
First, it's an example of how organic pest control CAN be more efficient that conventional control. If that wasn't the case, they'd be trying to splice the active ingredient of Atrazine into corn DNA. This is not insignificant. Organic was proven to be better. Hallelujah! Second, it really tests our mettle, ethics, and "soundbite philosophies" as conservation-minded folks. If Bt is a great thing to go ON the corn, why is Bt a bad thing to go IN the corn? Of course, I just reduced a very complex debate into sophomoric terms, but bear with me.
.
Organic solutions to our modern day problems are increasing and improving in efficiency every day. The most successful of these solutions will be picked up (and inevitably bastardized) by those who stand to make the most profit out of this efficiency. In some ways, that's what the founders of the American environmental movement dreamed of 40, 50, even 100 years ago.
.
If genetically modified corn with Bt toxins is as bad as an idea as it sounds, how will conservationists and environmentalists tell that story to the public, who just hear "blah blah blah Bt organic corn blah blah blah?"
.
And for it's worth, I am using Bt this year (Dipel wettable powder) because the cutworms are already hammering my pepper plants, and I hate to use conventional pesticides on anything other than an extreme infestation (facing total crop loss).
at May 18, 2010

Very interesting read here as this is a topic much discussed in our house hold. We use food grade DE on our plants, dust the chickens, and even add it too their water as a natural dewormer... but for some reason I am still uncomfortable with it. Maybe its because I feel it will be only a matter of time before it is "super charged" by scientist or perhaps its because I also know that just because something is "naturally occurring", it does always mean it is safe. As for our garden most of the time it has just proven to be easier for us to go through and pick the bugs off. I realize that isnt an option for large scale growers... So what is the answer? I am still debating that myself but I still always love to hear what works for others. Keep us updated on the gardens progress!
Thanks,
Leigh