The Fish of The Year 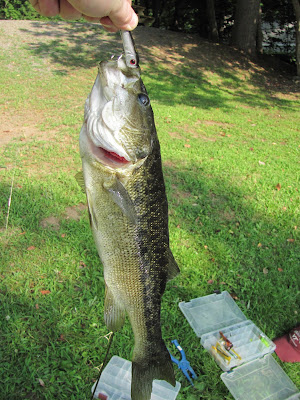 Spotted Bass -19" -Released Alive
.
Some more detailed writeups about our "not really planned" trip to western North Carolina are in preparation, but I couldn't hold off any longer to throw out a post about this confirmed citation spotted bass!!!
.
When I rolled out of bed about 10 minutes before dawn on the sixth day of our trip (and third day of our side trip to Asheville, NC), I was anticipating another challenging day of fishing - which I received. Temperatures, even in the mountains, were topping out around 95 degrees, with humidity in the 70-80% range. Water levels in rivers, lakes, and ponds were not critically low, but low enough to cause problems for fish and anglers alike. Insects - especially wood beetles and Japanese beetles - were plentiful and constantly falling into the water, providing ample "free food" for fish in an overfished and undermanaged area. A better angler- who I strive to be one day - would have come prepared with a fly rod and terrestrial flies - especially beetles.
.
I'll tell you about the rest of the morning's events in a later post, but suffice to say, I was returning to our cabin around 830am after having caught 1 fish - a "schoolie" bluegill about 5 inches long, and having lost about $12 in tackle in the lily pads. I thought - maybe I'll try the spot I fished yesterday? Why not?
.
I focused on an area with high overhanging trees, and numerous bass and sunfish poised below, waiting for free food to hit the surface. On the previous day, these fish wouldn't hit any standard lure, and it was an impossible spot to cast the previous day's only successful lure - an unweighted mosquito (fly). These were smart, fat, and lazy fish.
.
A few of the bass "in queue" were big - I couldn't tell how big - and I climbed out on a fallen willow tree and side-casted right under the branches. I caught this fish on my first cast - my only bass of the entire 8 day trip. It was about a 30 yard cast, and I popped the lure very lightly because the water was clear and the fish were already staring at it. A bass - this bass - cruised by slowly into deeper water......but turned after 5 yards. It then slowly closed on the lure and after a few more pops, took the lure and raaaaaaaaaaaaan out the drag. It took about 3 minutes to get him ashore. I photographed him and released him - he was exhausted and needed several gill flushes to get moving again. My heart raced for two hours.
.
I caught it on a $3.99 2" BPS Z-Pop Hardbait, a BPS Micro-Lite rod, and an Okuma Avenger (15a) reel strung with 6lb Sufix Siege.
at July 17, 2010

Congrats to ya! That is a mighty fine fish and a good work out for your heart! Can't go wrong there if you ask me ☺

I just found out from a fisheries buddy that it's actually a spotted bass, which makes it a STRONG trophy fish (the requirement is 15" or 2lb). It's my first spotted bass (that I know of) in a lonnnnnng time...I'm thinking Spring Break 1993 in north Florida.....

Thanks for stopping in!