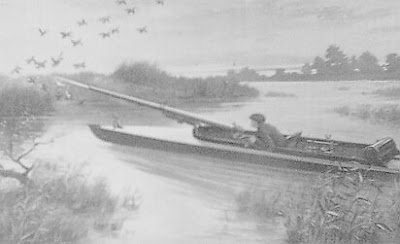 Is that a punt gun or are you just happy to see me?﻿
The next 10 days are shaping up, and it's maddening (just ask my wife).  Deer hunt on the eastern shore - canceled.  Goose hunt near the PA border - confirmed.  Canvasback and goose hunt on the eastern shore - confirmed.  I am cashing in some favors to hunt some different rivers and to do some different types of hunts than I've been doing since January, 2010.  I'm in a bit of a rut, so who knows, maybe this will pull me out?

Work is totally insane, as predicted.  Family life moves on at warp speed, as predicted.  Maybe - just maybe - I'll have a couple of amazing days outdoors before waterfowl season ends, and the late winter blues - usually February 1 - April 1 - set in.

Word came today that two duck hunters drowned in separate accidents in eastern Virginia.  Both were extremely healthy young men under age 30.  Everybody be careful out there, don't get in a boat alone, and make sure that PFD is handy (or on you, preferably).  No amount of ducks, geese, or fish are worth dying out there in some godforsaken frozen river.
at January 04, 2011

Good luck on your hunts!

Yeah, we'll see Trey. Mostly I'm just burned out on having lame hunts and I want to switch some things up and have some success.

Planning successful hunts (given changing weather) is awful tough with a little one in the house.

Best of luck to you, on a side note where has your brother Tug been?

Well good luck out there and have fun!

good luck big brother.The weather is shaping up to make for a good end of season,I can't wait to get home in a few weeks.

DEDH-I'm still kicking,just been focusing on some issues at work that are bringing me down.I hope to be able to post an explanation on the blog in the next few days.