What's in a Picture - Freedom Edition! 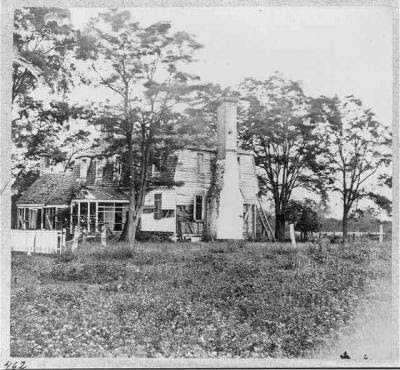 So, the Downeast Duckhunter asked a while back, "What's in a historic picture?"  Depends on the picture, I guess.  Take, for example, the image above, from the mid-1800s.  Looks like a small-ish American plantation house under reasonable upkeep.  Nothing fancy.   It wouldn't mean much to you if I mentioned that the house is in Yorktown, Virginia, where I went to high school (and the only hometown my two brothers know).   It also wouldn't be terribly significant to note that the house belonged to Augustine Moore, as Moore himself never played a major role in history.
.
So perhaps you'd find it interesting that in this house, in October 1781, colonels of the British Army sat down with General George Washington at Moore's old, splitting chestnut dining room table and agreed to:

"...march out...with shouldered arms, colors cased, and drums beating a British or German march. They are then to ground their arms and return to their encampment, where they will remain until they are dispatched to the places of their destination..."


The British Articles of Capitulation.  Lord Cornwallis was immediately imprisoned.  Lord North exclaimed, "My God, it is all over" and immediately sailed for England.  Thousands of English, German, and American loyalist soldiers were disarmed and imprisoned within 24 hours. It was done.

America was a free country. The British sat in this very house and said, "Fine. You can have it." While the British Empire did not acknowledge surrender for another 18 months, their regular Army and its mercenaries surrendered here on October 19, 1781.

Look at the picture again.  It is the Moore House, on York Plantation (now Yorktown National Battlefield), overlooking the York River in southeastern Virginia.  Freedom was finally claimed by Patriots at this modest place.  Not Boston, New York, Charleston, or any other great American city. Yorktown.

And that's where I'm from. 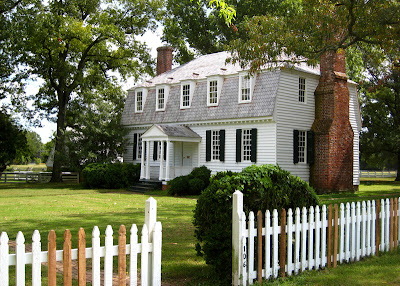 Now that was pretty cool and I'm sure DEDH will enjoy the picture and story. I thought it was neat that it happened on October 19th. That's my birthday.

It ended in your backyard and began in mine...

The Battle of Machias was the assumed first naval battle of the revolution in early June of 1775. The Margaretta was captured by some local patriots and ended up in my community.

Very awesome Swampthing, you are the man...

The stories that old pictures can tell are always fascinating. I always did like history.

I bet if you took a survey of where everyone thought it all ended the majority would guess the larger of the cities at the time.I love it whe Ol' Yorktown gets recognized

That's cool! I like the past/present photos. I also like the tidbit facts that you'd think everybody should know....and really don't.

Maybe I should have done mine on why we are known as "The First State" since everyone is like Delaware? What state is that in?

Ready for the "small world" moment? I've worked for DelDOT for the past 19 yrs and my husband for the past 15 yrs. I supervise the Sign Shop

You should! A good, entertaining history of the Delmarva is needed. The "standard" book is "Between Ocean and Bay" which is as boring as a textbook, but has some good info about Wm. Penn and the Dutch, Swedish, etc. all fighting over Delaware.

The "standard" for how these natural history books can be written are things like "The Big Oyster" - makes the argument that NYC owes its existence to oysters and watermen, and "Mannahatta", a HUGE book that focuses on Manhattan from 10,000 years ago until American independence, although it continues to present day. Amazing to read, and based on facts & science.

The sign department? Oh snap, I used to be "reprazenting" up in the Bear field office. Working with Ken Dunne and some of the other folks over there.