Ha ha! I had to start with that.  Mid-Atlantic outdoor maven LB over at Bullets and Biscuits mentioned River Mud as a "Versatile Blog." 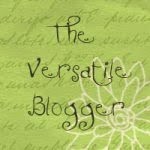 And this blog is that, so I'm grateful for the recognition.  My life and my outdoor pursuits seem to constantly be changing, primarily with the seasons, and so I do write about a lot of different stuff. In LB's words:

Swamp Thing @ River Mud - hunter, fisher, father, gardener....it's all good in my book. And he understands the "lower, slower" way of life in my home state.

As a standard blog-type award, it requires me to do stuff under the auspices of "improving my writing" for the purposes of increasing exposure and traffic to like-minded blogs.  This one requests a list of "things you might not know" about yours truly, as well as a list of bloggers to whom I'd award this same distinction.  Or as I call it, "Feelings and Friends."  Fine, I'm game.  I don't do these too often.

1.  My career is what I thought it might be, back to age 16 or so. Alright, so I envisioned that I would live in an old farm house on a wildlife refuge, where I would design and build fish and wildlife habitat projects.  And in reality, I live in a city of 750,000 people and I have spent my career designing, funding, and building habitat projects on wildlife refuges.  And another half of a career driving to those far-flung refuges.  That's pretty close. I guess.

2. I spend too much time thinking about my own mortality, and that of those around me.  As I get older (just turned 37), it's easier to see just how quickly time passes and how short our lives really are, in the scheme of things.  The outdoors drive of my younger years (More! Farther! Bigger! Now!) has been replaced by a conscious determination to truly appreciate my time outdoors.  Because whatever happens to my soul for the next 5 billion years or beyond, I will never see, hear, smell, touch, or taste this world as I do in this lifetime.  The human body (I'm convinced) is a one-time experience - eternal soul or not.

3. My garden is pretty bland because I am a picky eater, especially when it comes to vegetables.  This is a work in progress, thanks to my wife. It's embarassing to spout all this "live sustainably stuff" out of one side of my mouth, while saying, "No thanks, peas are nasty" out of the other side of my mouth.  And yes, my wife reminds me of that frequently.

4. I have huge issues with people in leadership positions who refuse to lead, or at least select a leader to make the hard choices for them (and then abide - not waffle - by the results).  I have left three or four jobs in the last 15 years for this reason. My last boss's boss had the world crashing down around him and I was told, "Ya know   A few weeks, wtf? we were being audited and the phrase "material noncompliance" was being tossed around in reference to a $3 million initiative.  The employment of a half-dozen biologists was hanging in the balance.  Tell you what, Hoss, you can mull that shit over for maybe 90 minutes tops, then we have to fix the problem. Post-script - Dr. Bob the Muller was forced into retirement two years after this particular boondoggle.

5.  Real talk.  I am a dude. That is the deal.  I went to college (and was a resident advisor to 18-year olds who missed their mommies and couldn't hold their liquor) in the mid-90's "PC Alert" era, and got to hear for years that men are the root of our society's problems, men have a genetic predisposition to violence, and the coup de gras - "every man is a rapist or a potential rapist."  That happened! Those things were said and written! Repeatedly! For years!  15 years later, a google search for "every man is a rapist" returns 310,000 links.
.
Look, there is nothing wrong with being a dude and liking dude things (which does not mean acting like a baboon and/or expecting the women in  your life to clean up your proverbial and literal messes 24/7).  Being decisive. Courteous. Strong.  Responsive. Are those things so bad?  I don't think so. Have an abusive father, boss, or spouse? That really sucks, and I will help you with that if I can.  But don't ever hang that shit on me - it's not mine.  And it's not me.

Friends
This is pretty hard, actually, because in the 3.5 years I've been blogging here, a lot of great (GREAT) blogs that I really admired have gone by the wayside, some without warning.  So if I've listed you below, please accept this award de Versatilite and post up! And even if you have to cut back on your posting at some point, don't ever totally quit!

NorCal Cazadora.  Holly is great, and this is a great hunting blog.  She comes from a writing background, so I try to learn from the way she runs her blog.  Her site is kind of at "the next level" so I don't expect her to respond to this, but you should check out her site, regardless.

Sleeping in the Dirt.  This is an example of a site that's achieved some great things and is going through some changes right now.  Aaron is a good writer and he's trying to make a living out of it.  The guy is hard-charging, and one look at his site will tell you that - from tracking down the elusive Gila Trout, to fly fishing for Northern Pike.  The stories are good, and his attitude is great.

Add it Up.  My brother A's blog.  I wasn't going to list it, but he shockingly updated it earlier this week.  A teaches robotics at a magnet high school.  He also hunts and fishes with T and I, and he has a different perspective on things than I do, which I appreciate. The blog is rough around the edges (because A thinks nobody reads it) but it's a unique look at what else is going on with our family these days.

Tugboatdude.  My brother T's blog.  Also in the mold of "rough around the edges blogs run by a younger brother" but when he updates, he includes a lot of content and great photos. T is a merchant marine by trade, so again, it's a little different look at the same things I deal with outdoors.  When he works offshore, he has no cell signal and therefore, no blog posts.

Maine and Mainer.  I've enjoyed the Maine Outdoorsman and Downeast Duck Hunter for literally years now - they are both outstanding sites.  I cannot tell them apart, most of the time.  I bet you can't either, which is why you should visit both sites.

Brave Eagles Hunt with Antique Brownings.  Trey is about a year deep into his blog.  One thing I've been watching (and trying to learn) is how he weaves old (pre-blog) outdoor stories back into the mix, which is something I've done, but no one seems to read them when I do it.  Hmm.  The site is certainly versatile, running topics from antique furniture restoration to childrens' bass tournaments.  Definitely worth checking out.

Thanks Swamp for the kind words and the award. I'll see what I can do about a post, but I would probably just mention the same folks that you just did! Thanks again!

HA! Love it! Thanks for following through. I knew of Trey and Tug but not the others. I'm gonna check them out.

Cool post. Thanks for introducing me to a few new blogs and congrats to the winners.