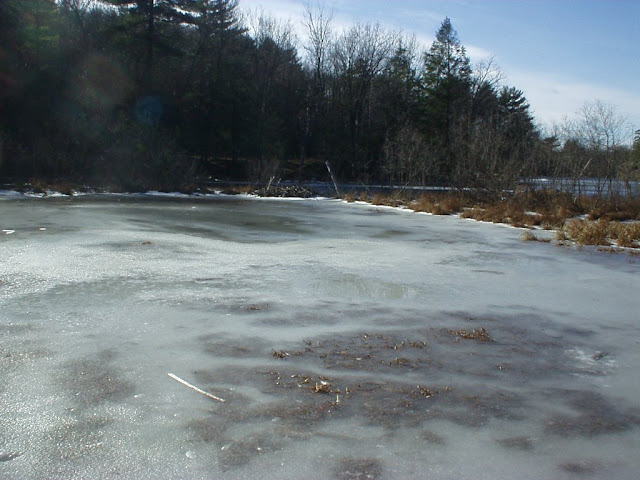 Scene of the crime - January 2001.﻿
Before I knew it, it was the new year - January, 2001.  I hadn't hunted again all fall.  Sure, in the past 8 months we had moved, gotten married, and I had changed offices and clients at my job.  And sure, we already had week-long camping/surfing/fishing trips to the NC Outer Banks (two separate trips) and the Cape Cod/Rhode Island seashore already on the calendar for 2001.  But still.  It marked the second FULL season I had lived in Maryland, and somehow I had not even attempted to hunt in the state.
.
I still had my Remington 870, torn-up Pro-Line waders, cheap steel shells, and garish looking Flambeau mallard blocks - unweighted keels - I had bought in North Carolina, where a bunch of hillbillies got me hooked on duck hunting several years prior.  But with life finally settling in, and priorities becoming a bit clearer, it was time to go hunting.   After two years of research into Maryland's public lands and hunting regulations, I thought I had it all figured out. I'd hunted ducks in NC and VA, in marsh and in mountain stream.  How different could Maryland possibly be?
.
I picked Millington WMA as my destination.  It's an assemblage of very ducky (though very pressured) properties at the headwaters of both the Chester and Sassafras Rivers, on the Maryland-Delaware border.  Ponds, impoundments, creeks, swamps, tons of good land.  At the time, it also didn't require a call-ahead, lottery, or reservation - you just had to sign your name at the check station and head out there.  I had scouted the spot.....in August.....but at least I'd seen the lay of the land.  I remember circling the saturday on my calendar.  This would be my first hunt alone with no one to tell me "set up here," "decoys there," and "shoot now."
.
I drove the 90 minutes out to Millington, arriving around 430am, and was horrified to see the circus at the check station.  The blaze orange circus. I never hunted deer before moving to Maryland.  I mention that because the saturday I picked was the first saturday in January, which as it turns out, is always the "late firearm weekend for deer."  Missing that detail was kind of a botch, but not nearly as much so as my decision to not turn around and go home, rather than hunt ducks on public land when deer are in season.  That was a mistake. But I was already there.
.
Likewise, I had fouled up by not scouting immediately before my trip.  Even though temperatures were a bit above freezing, the wooded swamps were still locked up in ice from the previous freeze, with no ducks to be found.  As I waded off the access trail and into the swamp, I found quarter-inch thick sheet ice in waist-deep water.  I figured that in the open hole I had found in August, the sun had perhaps burned through the ice.  Turns out I was wrong, but I was already there.
.
Something else had changed in this swamp since August.  As I threw out decoys into my new hole in the ice, I saw headlamps directly across the swamp, maybe 100 yards away.  From the way they were flitting about, those guys were clearly not moving onward, but setting up a spread. Instead of wading out to chat with them, I just hunkered down, afraid of a conflict (stupid).  Once the sun rose, it was apparent that MDNR had come in and put in a movable (sled) blind on another treeless hole in the swamp about 100 yards from my supposed "honey hole."  The blinds (I knew) required reservations.  And guys were in it. And their decoys were out front. I was staring at them.  That should have been my second (third?) indication to leave. But I was already there.
.
The actual hunt, Thank God, was uneventful.  The predicted cloud cover quickly gave way to bluebird skies and howling NW winds.  Nothing but snow geese flew, and those didn't land anywhere in our area.  Nobody but deer hunters shot.  Eventually, I packed up and started to wade back out.  A sheet of ice tore a ridiculous gash in my waders right below the crotch, sending a stream of 32 degree water right down to my toes  for the remaining 50-60 yard wade.  Oh, and I was wearing jeans and cotton underwear beneath my waders.
.
By the beginning of goose season in November 2001, my outlook, attitude, and approach to hunting was totally different and bordering on paranoia.  I don't know what exactly changed, except that I realized that within a 7 hour span of time that January, I had avoided taking steel shot in the cheek, almost certain hypothermia, and probably a well-deserved ticket from the game warden for encroaching on a legally reserved blind by not being prepared and by being afraid to call off a hunt.  When I prepared for this debacle - my first duck hunt without oversight by other hunters, I thought that the thing I'd miss most would be the pointers on decoy placement, calling, or wingshooting. Turned out that what I needed most was somebody to tell me, "this is not going to work. This is not safe.  You won't kill anything today. You need to bag this hunt and go have a nice, hot breakfast in town."
.
It's been over a decade since that day.  Since then, I have had many boring/dud hunts, and a few "debacles" here and there, usually caused by my failure to adapt to changing marine, wind, or lunar conditions.  But nothing has come close to this near disaster I've described for you here.  I hope your most ignorant or embarassing day afield was not quite as dangerous as mine.  But even if it was, I hope you remember it - and how far you've come since then -when you're feeling down on yourself for not having a good day on the water or in the woods.   We can't start off knowing everything.  Hopefully we all live long enough to change our ways!
at March 06, 2011

Lol well there is always a steep learnung curve when starting to hunt by your self in an area you have never hunted before. Good Story.

I suppose trial and error in this part was a tad bit on the risky side, however I am so thankful that I haven't got to deal with the logistics of signing in for duck hunting. I did have to pay a gate fee to get into the North Maine Woods for a moose hunt. There are times that I'm the only one on a several thousand acre lake fishing or setting up decoys. Guess I'm a lucky man. Nice post, we've all been there in some comparative way.

It was idiotic. It was one of the few hunts I wish never happened. But I learned a lot from it. Obviously, otherwise I would be dead, or would have lost my hunting priveledges in the state courtroom years ago.

It was even dumber than the time tug & I got stuck in our kayaks (only 4 years ago) in a tidal gut, at 4am, as the wind switched and the water ran out of the marsh. Oh yeah, and then the lightning started.

Back in college, I was convinced that we needed to hunt this swamp in the middle of nowhere. Thinking back on that, here I was in an area that I knew nothing about, had no map, had few provisions, and was with some dorm buddies that I knew very little about their skill and style. After three hours of trudging through brush, water, and an approaching storm I decided enough was enough. Thank god I had a compass, had just enough sense to call it a day and get back to the trunk and lay on the horn. Eventually everybody made it back out, that could have been a disaster. There are other stories, maybe I'll post about some of the more reckless times in my younger days.

I love how you kept repeating "but I was already there." So many times in my life that has got the best of me and it's nice to know that I'm not alone!

DEDH, that definitely qualifies as a "debacle" at best. Glad nobody got hurt!

K - I've gotten smart enough over the years to call off a LOT (probably 25%) of hunts the night before because of the kind of things listed in this post. Too much ice. Too many hunters on the property. Hunting alone in the ice.

I occasionally miss an EPIC hunt as a result, but at least I haven't died!