Thanks to our new friend Groupon, we had discount tickets to go up and see Longwood Gardens in Southeastern Pennsylvania.  Of course, the discount expires before the spring flowers come out.    To say the place has history is an understatement.  To see my wife's write-up of the trip, clicky here.

The property was part of William Penn's original land grant from James, Duke of York (later, King James II) in 1682.  In 1906, Pierre du Pont bought the 1,100 acre property and spent decades and millions of dollars converting it to an arboretum of specimens.   Pierre was extremely proud of the property, and opened it to the public - at first, just occasionally, then a few days a week, and then every day of the week.  His will created a Foundation and an endowment to maintain the property and keep it open to the public. The property includes a breathtaking five acre conservatory, built at du Pont's own expense: An orchid show was going on, and it featured some amazing specimens.  Most surprising were the slightly less dazzling plants, as orchids go, that are apparently native to the Northeastern United States.  While their colors were paler and the plants smaller than their tropical cousins, it was pretty wild to imagine those plants on the forest floor of a local bog or hardwood forest.  Cool, indeed. There is a children's garden in the Conservatory, where kids can run around like maniacs and touch rocks, plants, and water (in a very 1940s kind of way).  Hank seemed pretty thrilled by the experience (luckily his mama was smart enough to see the kids' garden on the internet, and brought a change of clothes for Hank).

We capped off the trip by stopping by Terrain, a high end garden design shop in Kennett Square, PA.  The displays were really amazing and attractive, but unfortunately I had a screaming 18 month old attached to my leg, so I didn't get to enjoy it too much.  A lot of their stock comes from gardening suppliers in Great Britain and France.  Very nice stuff!  Lettuce knives anyone? Terrain - where ladies in riding boots﻿ go to buy their gardening supplies
And what would any trip to Northern DE/Southeastern PA be without a stop at Capriotti's?  We ordered two 12" Bobbies - the Bobby is a ridiculous sandwich made of pulled smoked turkey, delicious garlicky stuffing, and lumpy cranberry sauce.  I was proud that we did not eat them on the 90 minute drive home.  However, they did not make it through the evening.  It was a fun trip and yup, we are still holding our breath for spring to truly break! 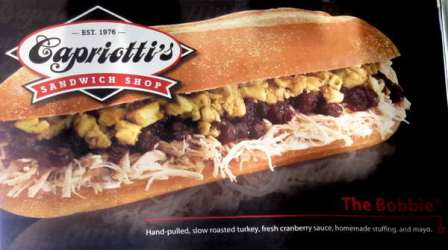 Now you're getting closer to my neck of the woods! The whole Brandywine area is really quite nice, Longwood Gardens is no exception. Truly beautiful, you should see it during the holidays. I'm eagerly awaiting a post on a side trip to Kennett Square - Mushroom Capital of the world!

What a fantastic spring day! We've taken Connor up there before and look forward to returning...hopefully not too long before our next visit. Hope the spring warm up is headed your way; supposed to be in the 80s here on Monday.

TR - I was wondering where you call home. I will be in PA at least once more this year - have a stormwater engineering class in Philly in September.

Jen - it was a cold but fun day - this weather is wacky but we are trying to keep our positive attitudes in effect! Spring will REALLY be here soon!

You guys have more will power than Rambob and I...the Bobby would have been gone in 10 minutes flat after getting in the car!

LB - it took some real restraint! We used to go to the one in Bear, DE when I was on call to DelDOT several years ago. You could stick that thing in your pack all day, and it would still be great at 5pm or whatever.

Awesome pictures! I had a bobby for the first time last week. Of course I got the 20 incher lol. Great blog!! You got a new follower