See Part I here, where I take our small backyard pond and begin the conversion to a more sustainable rainwater-fed bog.

After dutifully filling our pond with sand and peat moss up to the elevation of the pond's two "outfalls," I sat and waited this winter, rather than hastily planting our new bog last fall. It was a good thing that I did, because that 3 vertical feet of material compacted under its own weight, resulting in a shallow pond from January onward.   Any time someone is trying to manage water on a site (either to accelerate or decelerate drainage), it's critical to understand the relative elevations that are causing water to move/not move off of the site.  In our case, I decided to change the spot's hydrology from a fish and frog pond to a native bog, and the project actually had discrete goals (as any garden, landscape or habitat project should).  Our primary goals were "remove toddler drowning hazard from yard," and "establish backyard wetland that does not hold mosquito larvae, and is lower maintenace than the old pond."

Hydrologically it means keeping the new soil moist but not underwater, for reasons including mosquitos.  So I wrangled up some more sand and peat moss (the soil foundation of a bog) and laid it down.


I eagerly awaited the next spring rainstorm, which eventually came, and it looks like we are finally ready to plant.  The final elevations, relative to the pond's primary outfall, range from -0.5" to +2".  Even with settling, that should work. The choices are pretty limited, but I came up with three species that should work:

Ostrich Fern, one of my favorite forest/wetland plants, which has a beautiful growing habit and can be a huge plant.  The spot is truly shady and I'm curious how big it will get.  The plant is variously endangered/at risk/threatened throughout the Northeast, which is basically a function of the widespread destruction of its habitat - forested wetlands.

Catesby's Trillium, a woodland flower native to the southern Appalachians (not where I live), with a nice pink flower.  We'll see if it can survive the summer!  I currently grow red trilliums and two species of Jack-in-the-Pulpit, a similar plant, so there is hope.

Bloodroot, a native woodland flower that blooms (white) in early spring.  Bloodroot was used by the Algonquins to induce vomiting.  Wikipedia says that if applied to the skin as a salve, it "causes disfigurement." If Hank takes an interest in the plant, I'll have to compost them all.  Enough said!

Here's what I think it will look like (orientation is opposite of the photos): 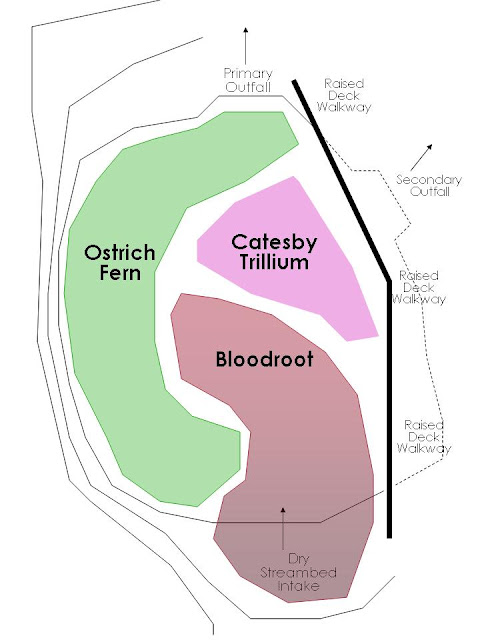 I'm real interested to see if this works out.Even after you post "phase III" make sure to keep us posted throughout the year as to it's progress

I love doing new landscapes! Good luck with your project. Can't wait to see how it's going to turn out!

We filled in our fish pond about two years ago for safety reasons too. Let's say our new neighbors don't like to keep an eye on their 8 kids....it took me one time coming home finding the 5 year old twins standing on the rocks "poking" the fish with sticks. I couldn't take the stress of worrying all day at work about if I would come home finding a floating body.

I like the bog idea and the bloom on the bloodroot is gorgeous. I can't wait to see who this turns out. Good Luck!

What about skunk cabbage?

Skunk cabbage would be great. Unfortunately I (as a plant nerd) am very opposed to taking it from the wild, and it is EXPENSIVE when cultivated. I guess it is a "specialty" plant.

I have a feeling that the trillium will not survive, and the bloodroot may struggle with all the moisture. If so, I will probably end up with skunk cabbage.

LB - a family friend operated an in-home day care facility in the Baltimore area and one day in 2005, one of the big kids (5 years old) left the gate to the pool open and a 2 year old (nephew of our friend) drowned. He was out of sight for 3? minutes and it was still too late.

I love danger as much (read: more) as the next guy, but there is NO way I can accept that kind of risk at my house.

And by about August of every year, the fish pond got to be a real drag anyway (cleaning the filter, etc).