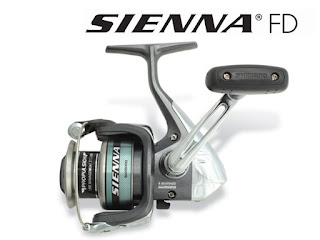 Some people say that blogger gear reviews are useless.  That bloggers love to get free and discounted gear so much that we wouldn't dare to write a negative review.  Wouldn't want to stop the gravy train, right?  And I love my Shimano Stradic that I received for free earlier this year via the Outdoor Blogger Network. So I'll give Shimano a free pass again.  That's probably what you think.

Well, if you believe all that, you will be able to put it to rest in about three minutes.  I recently picked up the Shimano Sienna FD (forward drag) for one of my ultralight rods.  I'd been using my Okuma Hardstone on this rod with no problems for three years, but just wanted to switch it up a bit.  And so when I visited my local big box sports store, they happened to have this pint size reel for 50% off of the $29.99 MSRP.  Sold.  Here's the thing. It was still a waste of money.

First of all, the body is 90% plastic and/or graphite, which I appreciate for the light weight, but it just does not have a good feel to it. I mean, how much weight can  you even lose off of a UL reel?  1.5 ounces? I have had it mounted on a super lightweight 4'6" graphite rod, and I felt like I was casting blindly.  I did not expect this reel to provide the extension or accuracy that the $150+ Stradic does, but when using this reel, my casts were consistently 20 degrees off to one side or the other. I received a "B" in college physics and I can't explain it.

Another issue I immediately had with the reel is that the bearings were either not well packed or well-oiled out of the box. This is basic stuff, guys.  Burning 1/16 ounce lures back to the boat should feel effortless and nearly mindless.  While retrieving several 1/8oz lures, I mistakenly thought that I had either foul hooked a small fish, or was dragging back some vegetation.  Nope.  Clean hooks.  Need more lube.

After approximately 40 minutes of frustrated casting (and no fish to show for it), the worst came.  The reel experienced some kind of backlash, which pulled an extra loop off of the spool and created Insta-Birdsnest.  I calmly pulled it all apart and went back to fishing.  Three minutes later, the same.  I worked out the kinks.  Ten minutes later, a nice largemouth took my lure on impact and here's what happened to the reel: I stomped back to the truck and got my fly rod.  Three days later, this reel is still rolling around in the truck bed, with all of this line attached to it.  Hopefully someone will straight up steal the damn thing, so I can justify buying a more useful backup reel for my ultralight kit, like the Shimano Sahara (about $70) that brother T recently bought for his trout rod.  I have bought dozens of fishing reels in my life.  At just $14, the Shimano Sienna is definitely the cheapest, and somehow still a waste of money.

The Sahara,oh the Sahara,yeah I have been putting off that review.I guess I will get to work on that one.I held Sienna in my hand for three seconds.chuckled and bought the Sahara.It May have been on sale for a reason.

Interesting view. I've been a big fan of the Sienna reels for a few years now - and haven't experienced any of the problems you noted here. I wonder if perhaps you got a lemon?

A Stradic it's not, but then again it's not supposed to be.

I've used the Siennas from the 500 to the 4000 size for carp, bass, trout, catfish, steelhead and coho salmon. I've not had a failure yet.

Before you think I've recieved any of these for free - I haven't. I've never received free gear from any maker for review. I'm just a long time Shimano user.

I bought a sahara 500 and I love it. For some reason I've never had good luck with 500 sized reels until the sahara. They really don't make the 500 reels the same as lager ones. I say go ahead and get the Sahara!

Mark - you may be right. Maybe the batch I saw on sale had known issues.

And to be fair, I LOVE Okumas but I often see "seconds" and "reconditioned" Okumas on sale at the same store.

Thanks Justin, I will probably pick up a Sahara 1000 this winter to back up my Okuma on the UL rig.

I Have a sienna 2500 on a quantum laguna and I've never had a problem with it.I also own 3 saharas.the sahara is a better reel,but in my opinion the sienna is a good reel for finesse fishing for bass.I've caught 27" redfish on my sienna and it handled them like a champ

Use lighter line - its a tiny reel. Thick line and tiny spool diameter is the cause of your birdsnest.

Use lighter line - its a tiny reel. Thick line and tiny spool diameter is the cause of your birdsnest.
Above
100% correcT

Its either you know how to fish or you don't. I own then sienna and it works perfectly. Never had an issue. Great reel for the price

Thanks anonymous, for taking a break from your travels on the BASS tour to make a comment that is useless, yet unhelpful.

A pretty standard observation of "mass manufactured products" is that cheaper made goods fail more quickly and fail more often. That was the point of this review, as I'm the owner of several mid-range ($50-$220) Shimano reels and have no problems with them.

Also, seriously, thanks to the commenter who made the note about using lighter line. I really hate 2lb line, and the Sienna is labeled for 2-6lb line, but had I not put this reel in the recycling bin, it might have been worth a try to spool it with 2lb mono....

F.W.I.W. I've used Sidestabs for years, which is all the Sienna is (a rebadged re-issue of an older design) and have never had a problem. (Note: mine is a rear drag model)
Me thinks the reviewer either received a lemon or lacking technique, as is evidenced by the line cuts on the bail arm.

I have recently gone through two sedonas (1000 size) and got a sahara to try to fix the problem. The first sedona came out of the box scratchy and hard to reel, so I took it back and exchanged it. Same problem with the next, so I took it apart,oiled bearings, greased gears, and it didn't help. Got a sahara today and it was kind of scratchy and hard to reel, went fishing with it to try to work in the grease but it didn't get smooth. I have a sienna that I bought last year that is still out performing the sahara. Have you ever had reels come out of the package like this? I am losing faith in shimano...

I have both the 2500 and the 1000 and experience zero issues with them. Your reel displays a classic LINE problem. Either from bad line or improper spooling. All reels should be lightly inspected before use for grease and oil.