Guest Post: Any Way But Private - Why I Don't Lease Hunting Land 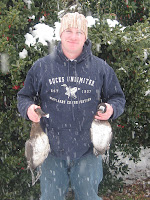 Note: this is the third piece in (apparently) a series debating the merits of public and private land hunting.  Today's author is my youngest brother, the Tugboatdude.  He has been hunting for about 10 years and has really started to find his stride hunting the public marshes and swamps of Southern Virginia.


I generally understand my brother's mindset. He is a Father working multiple jobs with little spare time. So in the spare time he does have, he wants his outdoor activities to flow nicely - as we all do. For his situation, leasing land is ideal and more power to him. In fact, I have hunted his farm lease and thoroughly enjoyed the laid back "not in a hurry" feel. However, sometimes I have to do things that fit my bill.  So, I really have no interest in leasing private land.
A short background on my outdoors experience: at 32, I am a master of nothing outdoors, but interested in everything that has to do with hunting, fishing, minimalist survival, etc. I have been fishing since I was a small child with my Dad.  I didn't start using artificial baits until about ten years ago, and I consider myself a good but not great fisherman.


I went deer hunting for the first time about 10 years ago and didn't hate it but it's not for me. Running dogs through the woods chasing a 75 pound deer while twenty grown men line the trees surrounding it..........not for me.My brother took me duck hunting around the same time period, my early twenties, and I was immediately hooked. Even though I never even got a shot at a bird until my fourth hunt.  It started with a stationary blind, went to field goose hunts, then to guided hunts trying to learn better skills, and now I have my own boat. What I don't have is my own spots because I hunt on public property.  So what if I took the money I put into the boat every year and leased a field or a farm?


This is where a few of the problems lie. The financial aspect would be the number one culprit. Let me break this down because it's the big one. I spend between 3-5 hundred dollars every year to improve my waterfowling experience. Everything from new decoys to grass mats to hide the boat. Two years ago i bought a brand new engine - $2,500. Last year,  a brand new trailer - $1,100.  Not to mention the every year licensing fees that cost me around 80 dollars just to hunt out of the boat.  So why not give it all up and lease a farm?


Because I can't afford it!  I know it seems like I spend a ton every year just to keep it going but the decent leases aren't cheap. I could join a club on the Eastern Shore of Va,which I was invited to do,for a price of $1,200/year. So what would I get? Access to a few decent fields that hold geese late in the season and a few ponds that hold residential mallards until the first freeze. I have hunted there, had a great time and seriously thought about joining.


So why not private land? Maybe it's because I'm stubborn. Maybe I like the feeling of accomplishment when I put my boat on birds that I found. Maybe I'm an idiot. One thing is for sure, if I had the money this wouldn't be an issue, I would do both, in South Dakota, in retirement. I can use the boat to get around to more than one area, I can and do use it for bass fishing all Spring and Summer. I'm really just searching for a solution. Unfortunately money doesn't grow on trees.


And all this talk about hunting has me geared up for September Goose season......bring it!
at August 13, 2011

Nice write Tug. I think you hit on one of the most critical of components of leased land. That not everyone can afford it. I could see in Maine, as I am sure other places, this can and has created haves and have nots. I still can't get over the fact that you have to pay to access good hunting. What a bizarre prospect!

Well, I read all three parts and everyone hit the nail on the head at some point.

I've hunted public land in Florida for the past 11 years for deer and it's been -extremely- difficult. Sadly, in this part of the country, public land vs. private land is like night and day.

But like Tug wrote, I can't afford to hunt private land. Hell, I'm in college and can barely feed myself. The $70 for hunting + gas to get there drains me. But if I had more money, I'd probably hunt both.

And at the same time,(I think it was Rabid who wrote it) if someone who'd never been hunting before asked me to take them, I'd much rather take them to public land down here so that they could get a grasp of what it can really be like. Not spoil them on relatively well managed private land.

I really like this little friendly debate.You should try and get the OBN to make it a writing prompt.I would be interested how others in the midwest and west coast feel about this subject matter.Oh and thanks for sharing my write up broseph!

Alex, the best leases up here, with some of the country's best goose hunting less than 2 hours from the White House, is a rich man's sport.

My current lease varies from $250 to $600 depending on how much time I put in at the farm. And (14 years after finishing my BS in wildlife), it STILL hurts to write that check.

You're not alone - but it'll get better!

I'm a land-owner AND a sportsman and I don't believe in leasing. This ain't Europe. (Thank God!) Take that for what it's worth to you.

Well, technically speaking, if it were Europe, then only the highest royalty (i.e. the government) would own huntable land, and you'd need their permission to hunt.

I personally have no problem with leasing because "hunting rights" are one of the rights associated with private land ownership (unless you own 100 acres surrounded by skyscrapers).

And because this is a semi-free country, I'm not opposed to somebody being compensated for the use of their property by another person - or their right to elect to sell or rent that right.