Hatin' on Hurricane Hype - Is the Media Evil....Or Just Useless?

We've been without power for two days.  Other than yesterday's 3 hour search for new stocks of ice (thank you Charm City Ice Works!) , it's been quite pleasant.  That's because we are lucky enough to be on city water and natural gas (both still working), and we were smart enough to prepare for the storm, starting about 4 days prior to Hurricane Irene's visit.

Yup, even with an estimated $10-20 billion of damage up and down the coast, it could have been worse.  And sadly, a lot of people and companies were counting on it.  Not least amongst them, the news and weather channels.  Almost as bad and just as embarassing, a virtual "Player Haters' Ball" has emerged against "The Media" in the wake of a storm that just didn't kill enough people to live up to the the hype.


Does this coverage drive public hysteria? Possibly.  I think it's very difficult to say that one causes the other, because hysteria and media both feed each other in a wonderful, sick, little system (yay, ad revenue!).  And of course, it's foolish to blindly state that "the coverage was ridiculous BECAUSE the storm ended up not being that bad."  What if the damage had been worse? If thousands, not a dozen, had died?  Perhaps the hype-haters would be satisfied.  But I have to ask - in that case, what service would this crazy news coverage have provided, in a more deadly weather event?

And that's my problem.  The 24-hour news cycle has allowed all of us to become totally complacent on receiving information, advice, and even instructions when anything is happening in our lives.  From advice on your fantasy football draft, to weather forecasts that we all know we cannot depend upon, but yet we watch every day on TV or online.

I carry my Marmot shell with me in the truck almost all the time.  Why? I can't trust the media to tell me whether it's really going to rain.  They are wrong more than half of the time.  So why would any of us think that TV meteorologists would be correct in predicting a major weather event like a hurricane?  That's like finding out Little Suzy can't keep her money straight at the lemonade stand, and so you put her in charge of mutual funds.  And yet - we let them.  They don't make us.  We let them. And that's assuming that they are attempting to broadcast useful information - that's a bad assumption, in my opinion.

Out of all of that brain-freezing news coverage of the storm, we received almost no good information.  When will the storm get bad? What types of damage, and to what extent, will different areas receive? When will the power come back on?  Where are emergency stations for food, water, ice, and medicine set up? What's the best way to prepare a refrigerator or freezer for an inevitable power loss?  How many batteries does a family truly need for a 3-day power outage?  What are the odds of losing utilities like water and natural gas?  When is the best time to evacuate?


Those are all very pertinent questions that, if answered, can help keep people alive - or at least, not rioting. Yet, the coverage was composed of almost total fluff and hours, then days, of "money shots."  Single trees down on houses.  A boat on the shoreline.  A destroyed fishing pier (that gets destroyed once every five years).  Whether this imagery is designed to create fear among viewers, I don't know.  But it's a waste of everyone's time and money. Telling your viewers, "You should be prepared to lose power in the next three hours," while "hype," is infinitely more useful information than a video of a flying car.

This morning, I mentioned to a Hype Hater that our public water system could have failed (it's 150 years old, and provides drinking water for 1.5 million or so people) and got the response, "Well, it's never totally failed."   Sorry, peeps. "Well, just hope for the best, and if it fails, I guess somebody will make it okay," is not an adequate counterpoint to the media hype.

The reality is this: the next time I see Jim Cantore posing like this, I wish he would be screaming into the microphone: "The Red Cross is set up OVER HERE at THIS INTERSECTION," and not "Look, a Kia wrapped around a tree. Look at this wind! Cool!" 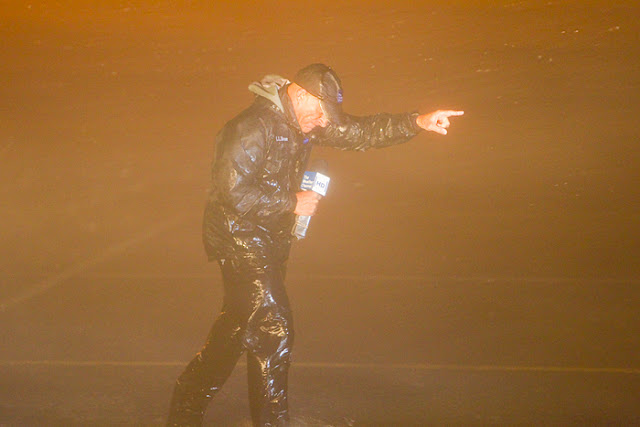 This horese has been beaten and yet is still alive.The media works the general public into a frenzy with every kind of weather event.The reason so much time is spent on hurricanes and snow storms is they can predict days in advance that it will in someway,somewhere affect someone.Just imagine if they could predcit tornados,thunderstorms and pinpoint what areas would be affected days in advance.

Here's my thing: I'm fully aware that the water system could fail. But the likelihood of it happening as a response to THIS particular storm did not appear to be a whole lot greater than it was last week when we had unnamed torrential downpours for two days, or on any other day for that matter. By all radar predictions and NOAA warnings, Baltimore was never in the path of most destruction. Were we in the eye for rain, winds, downed trees, power outages? Yes. That is not a disaster. That is LIFE. I know other people in other areas had it worse and I feel for them and wish them god speed... but the ratings chase that is Disaster Porn IS a problem, as I was trying to fully exploit for my own comic sensibilities! It DOES contribute to hysteria and idiocy. I don't think we can know the chicken or egg answer of which came first, but like you say - give us solid information, not your obvious disappointment that the entire Outer Banks didn't wash away.

Why didn't the media hysteria downgrade proportionately as the hurricane did?

Also, I hate when they preempt my tennis match so that Denise Koch can tell us 85 times, "We don't know when the storm is going to hit but WJZ will be there documenting all of it for you... FIRST."

BTW, I love that we are in total agreement, yet can still argue the fine points. That, my friend,is substantive content!

I lived through the storm in Maine without watching the media TV coverage- I left it Dr. Jeff Masters and Wunderground.com. The information he and his staff provided was spot on. What the television media can't do is talk probabilities- because most people just don't understand. The Weather Channel is for people not experiencing the storm- the people in California- not for those on the east coast. It's all a show.

I found twitter to be a wealth of local information regarding power outages, shelters, flooding conditions, etc.

"not your obvious disappointment that the entire Outer Banks didn't wash away."

Ty- that is a scary thought. The "days in advance" of ad revenue generation.

Tom - I think you described yet another situation in which social media has supplanted traditional media in usefulness to normal people.

"The Weather Channel is for people not experiencing the storm- the people in California- not for those on the east coast. It's all a show."

I honestly have never thought of it that way......scary!

I've noticed that the worse the storm, the less media coverage there is on it. Maybe because the media has trouble covering it when it's -actually- bad?

Like you said, we'd get a tropical storm roll through Pensacola and 50 different news channels will find the ONLY tree in the county that got knocked over and film a shot of it.

And at the same time, a HUGE storm like Ivan will come ashore, obliterate the city, knock out the water, and destroy the electricity for well over a month. But...there isn't much news coverage because they can't get to the worst areas. Well, at least not on the ground. Bridges are knocked out, roads impassible, etc.

I think news crews are unable to get to the worst damaged places until weeks after the storm, and by that point, the hype has died down and no one wants to watch it...so it doesn't get filmed.

So they stick to areas that they -can- get to and make sure they get a story of -something-.

And just because I felt it suitable for this post:
http://www.youtube.com/watch?v=Q64qvkVtXd0

In my not-impressively-extensive experience with non-NPR/PBS press (there WAS a difference), esp. TV, it's ALL about hyperbole. Which makes me nuts.

2 nights ago at dinner, a friend thanked me over and over 'cause she said the stuff I posted (links) on facebook re; the Motor Fire was WAY more helpful than anything she could find on the web via the press. She was trying to figure out should she cut her trip short and come home, i.e. was the fire near her house or no, and the press was 100% unhelpful. I also suggested she call the sheriff's office, as they coordinate evacuations.

That's 'cause I linked to sites with DATA vs. the clip of the reporter calling the fire (1st time 1,000 acres, 2nd time, 4 or 6,000) "MASSIVE" (WRONG), or the other reporter talking about all the terrifying things fire fighters face, like, and I kid you not, "trees, and bushes..." Lawd.

And the moment after a reporter described where the road was closed, Bear and I both automatically looked at our third eye to picture it, and said "Wrong."
(sigh)

As a representative of California, I do not appreciate (or, really, watch) the inane reports that inflate the drama of a natural event. Useless. I consult NOAA, weather underground, inciweb, nifc, etc. AND FACEBOOK, family updates.

Since this is getting long, I'll shorten the story of my interaction with a San Diego (commercial) TV guy asking me, as a park ranger, am I "overwhelmed?!?" by the big ol' crowd there to see whale JJ get escorted back to sea (tall ranger-chick suppresses eyeroll with all her might).

Needless to say, that did not get onto the news that day. =) Hyperbole free, therefore, useless.